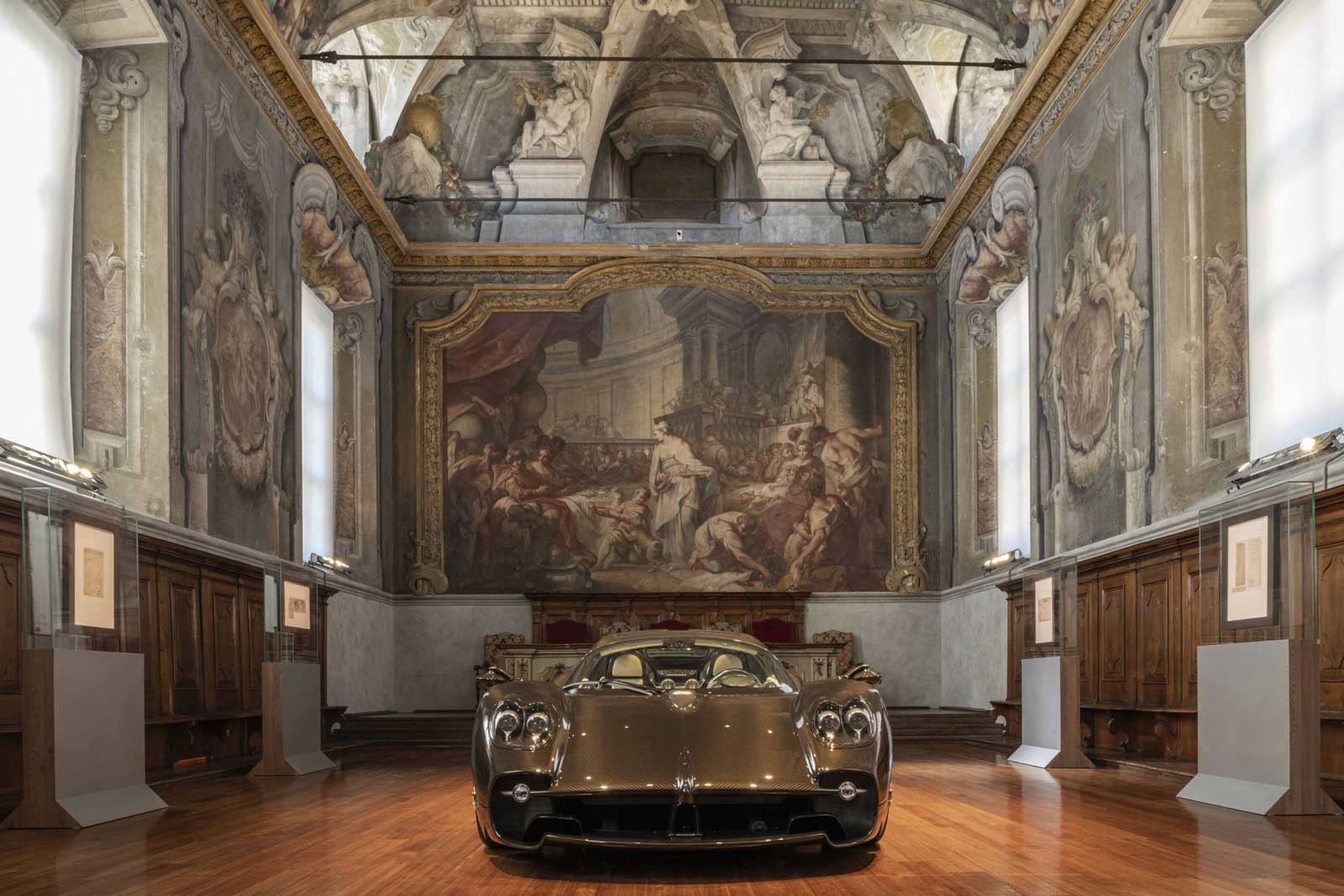 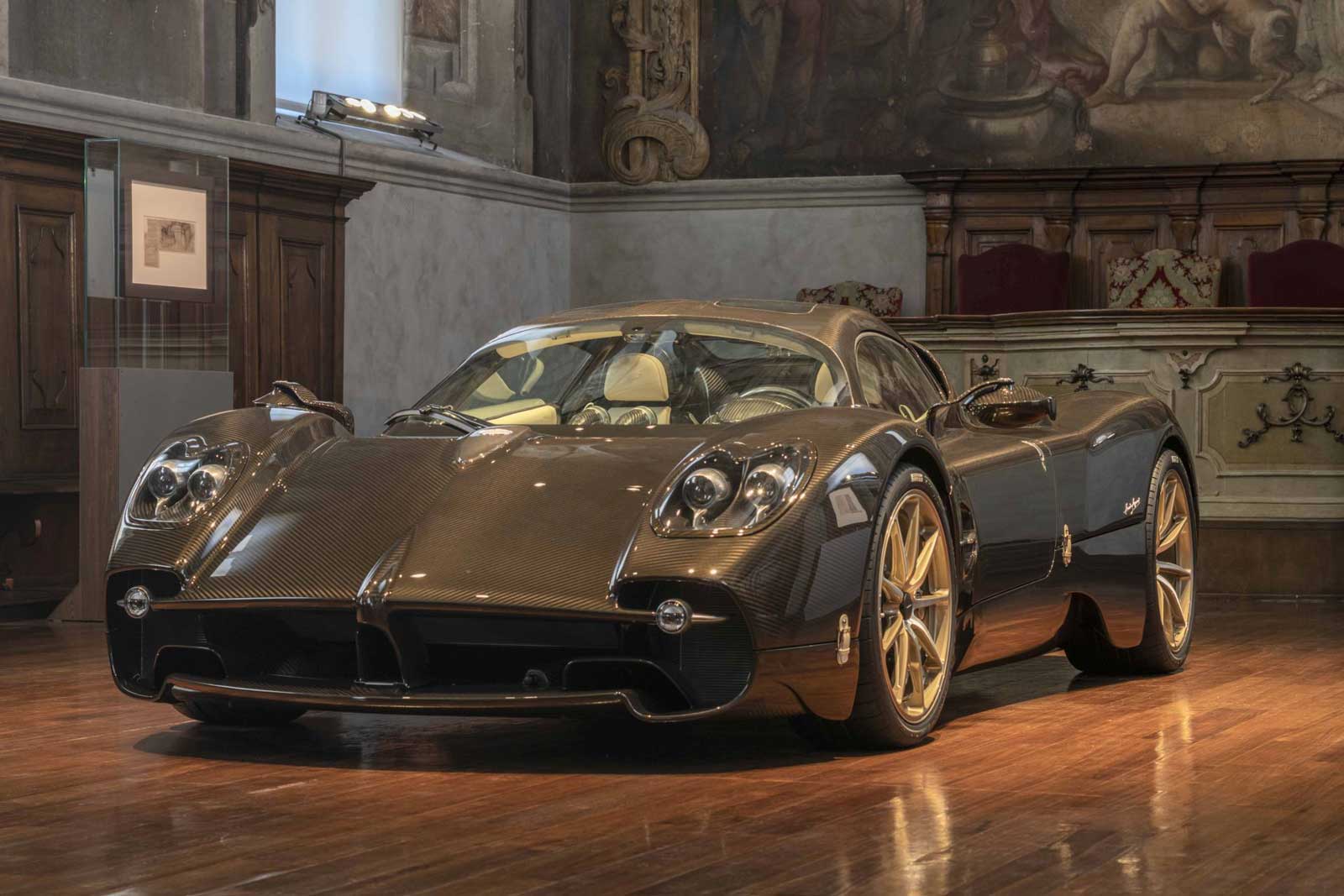 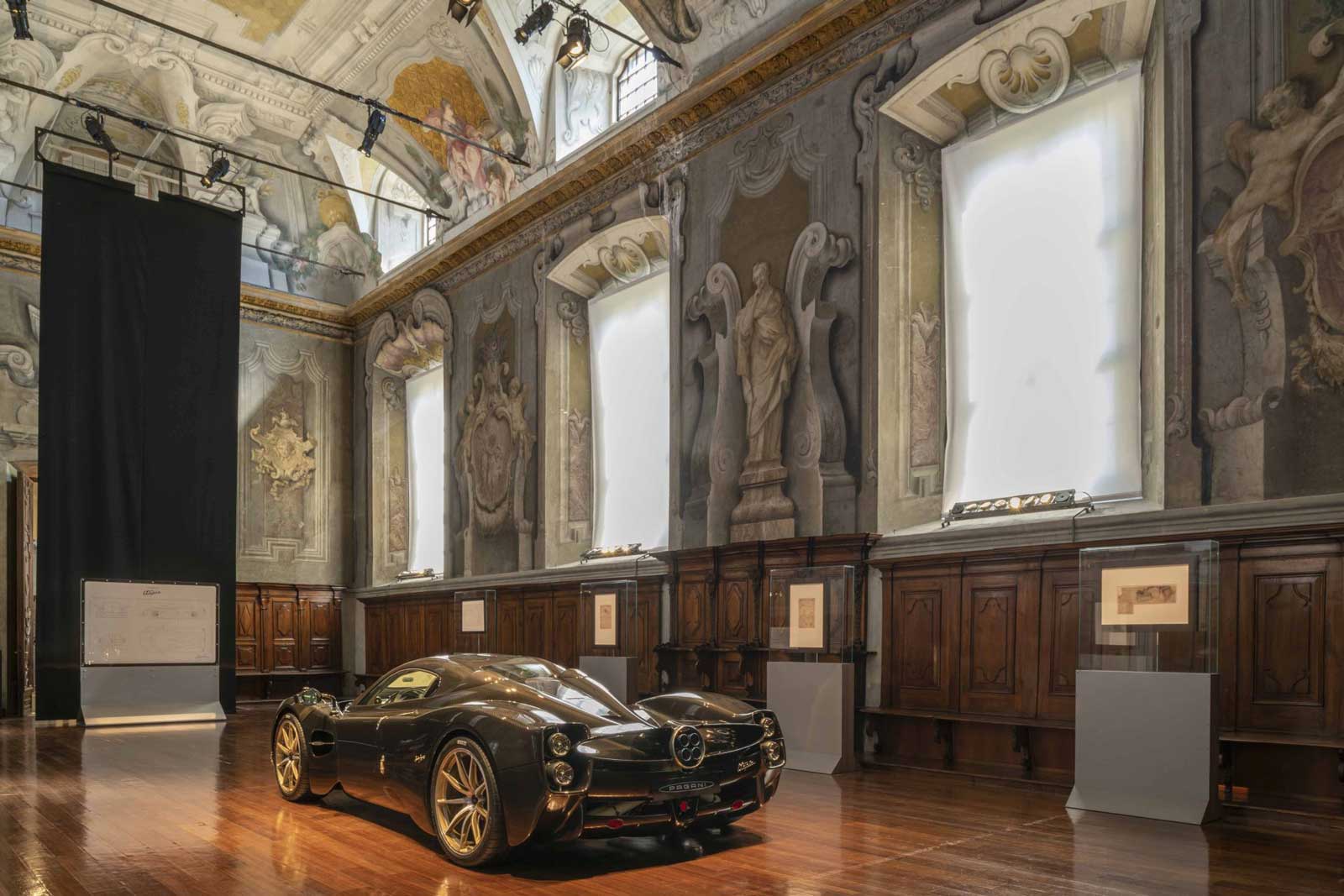 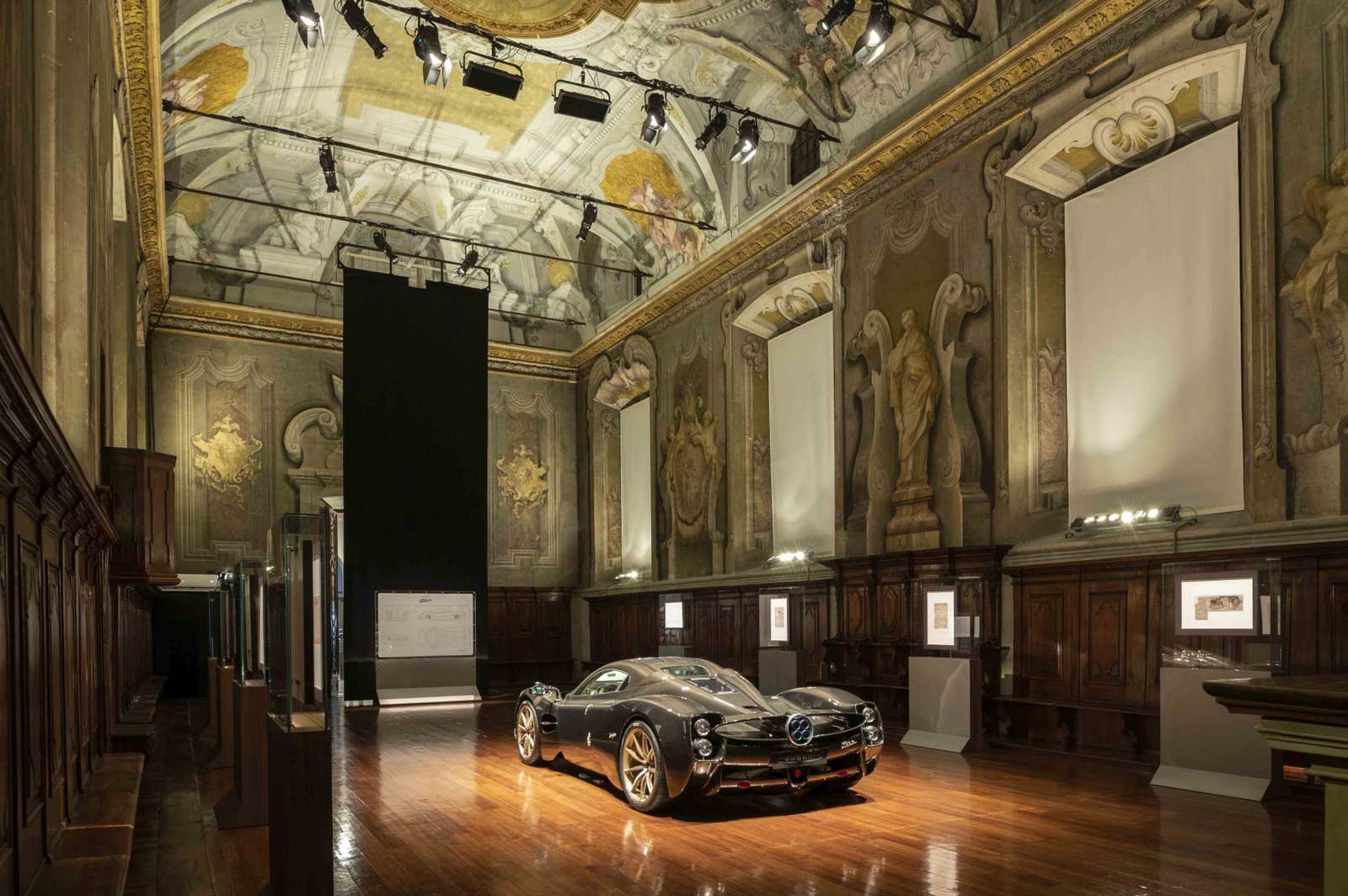 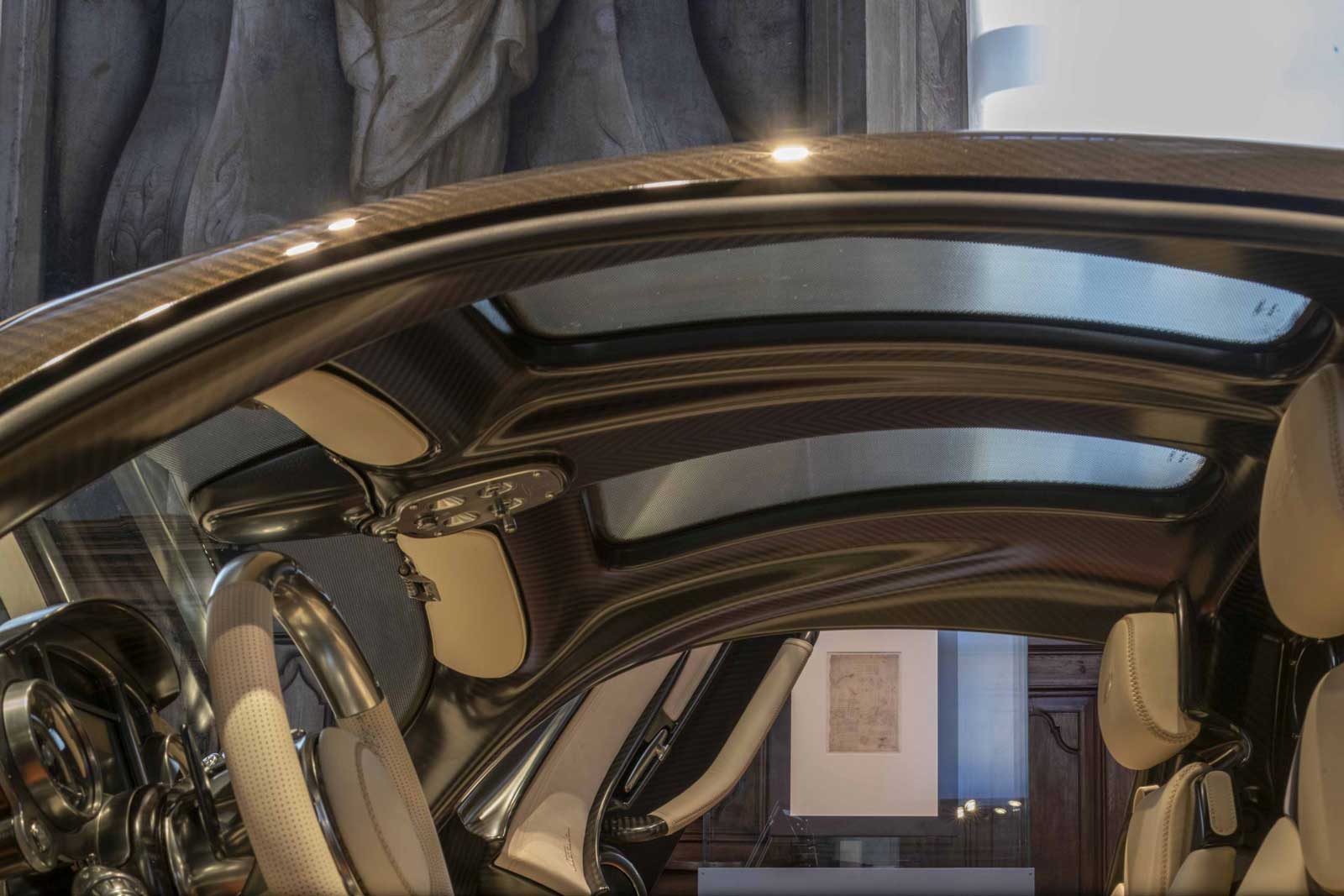 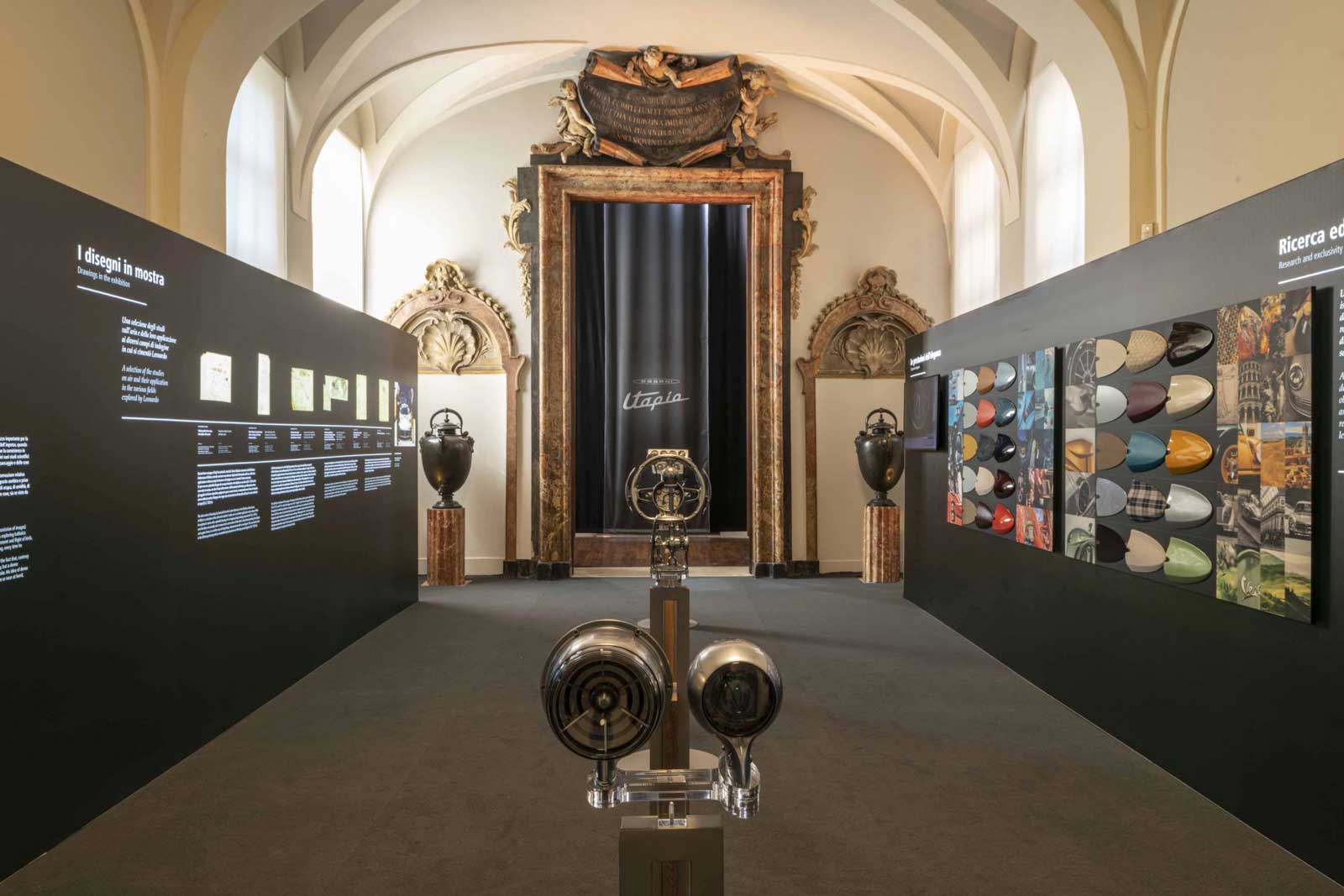 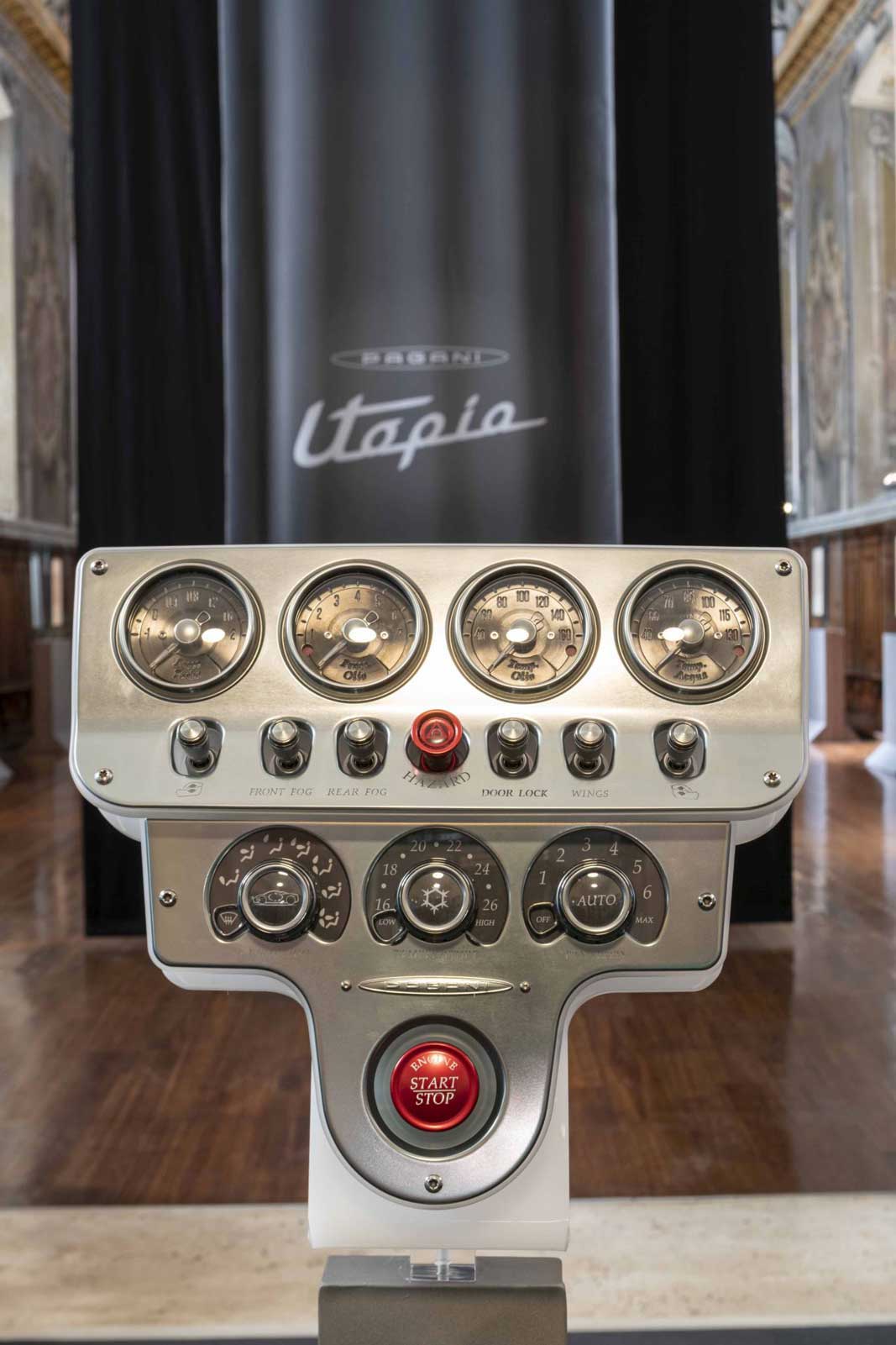 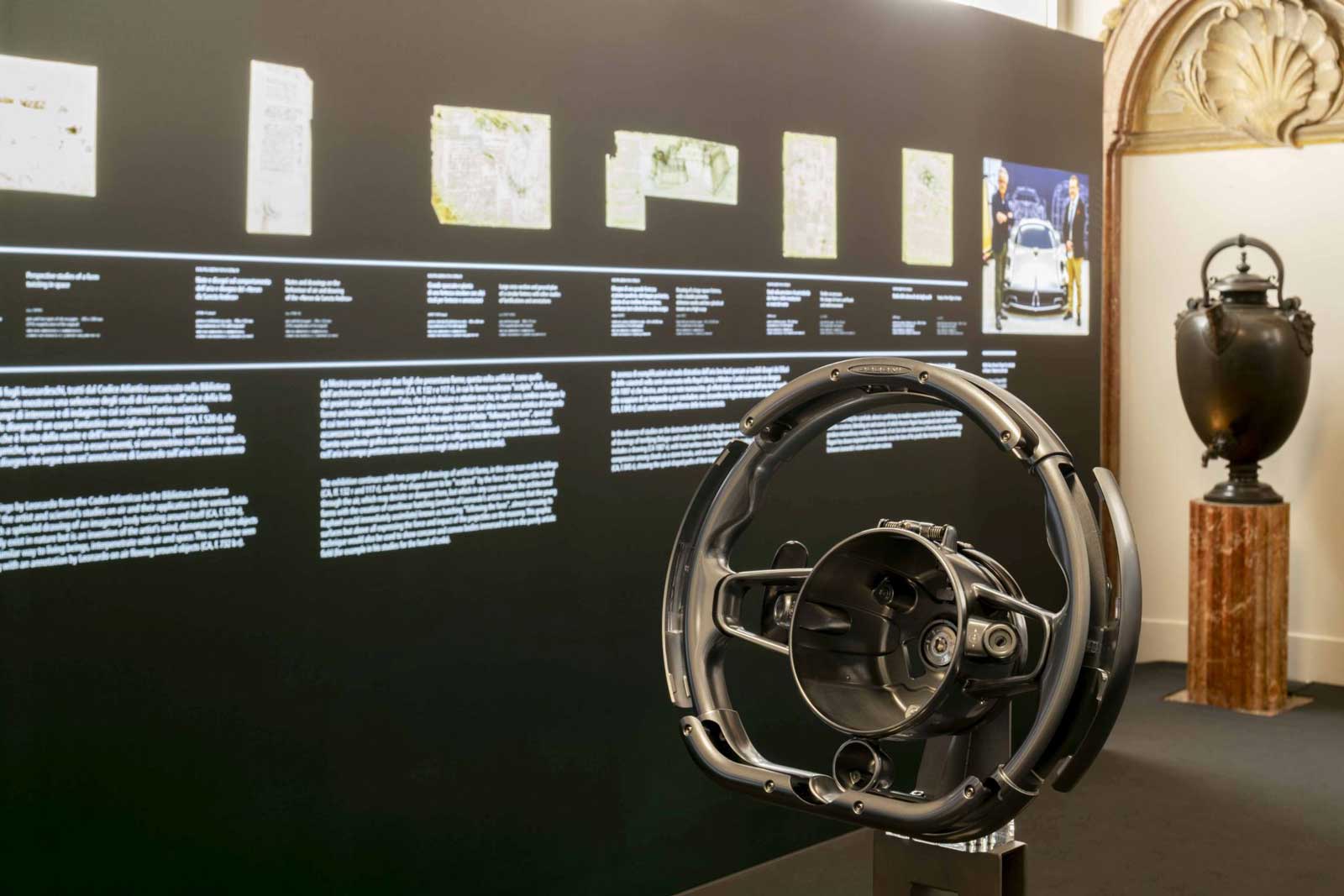 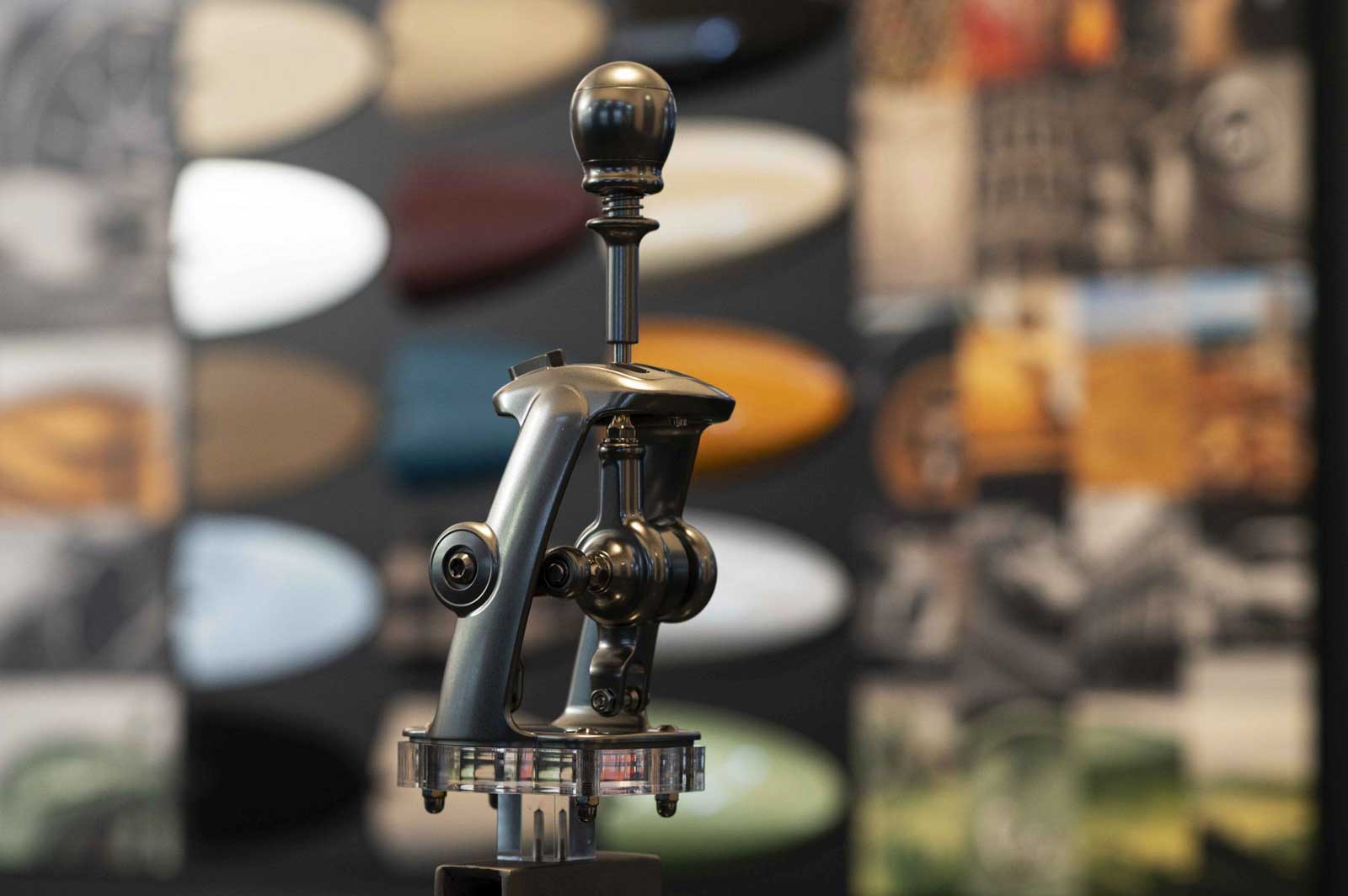 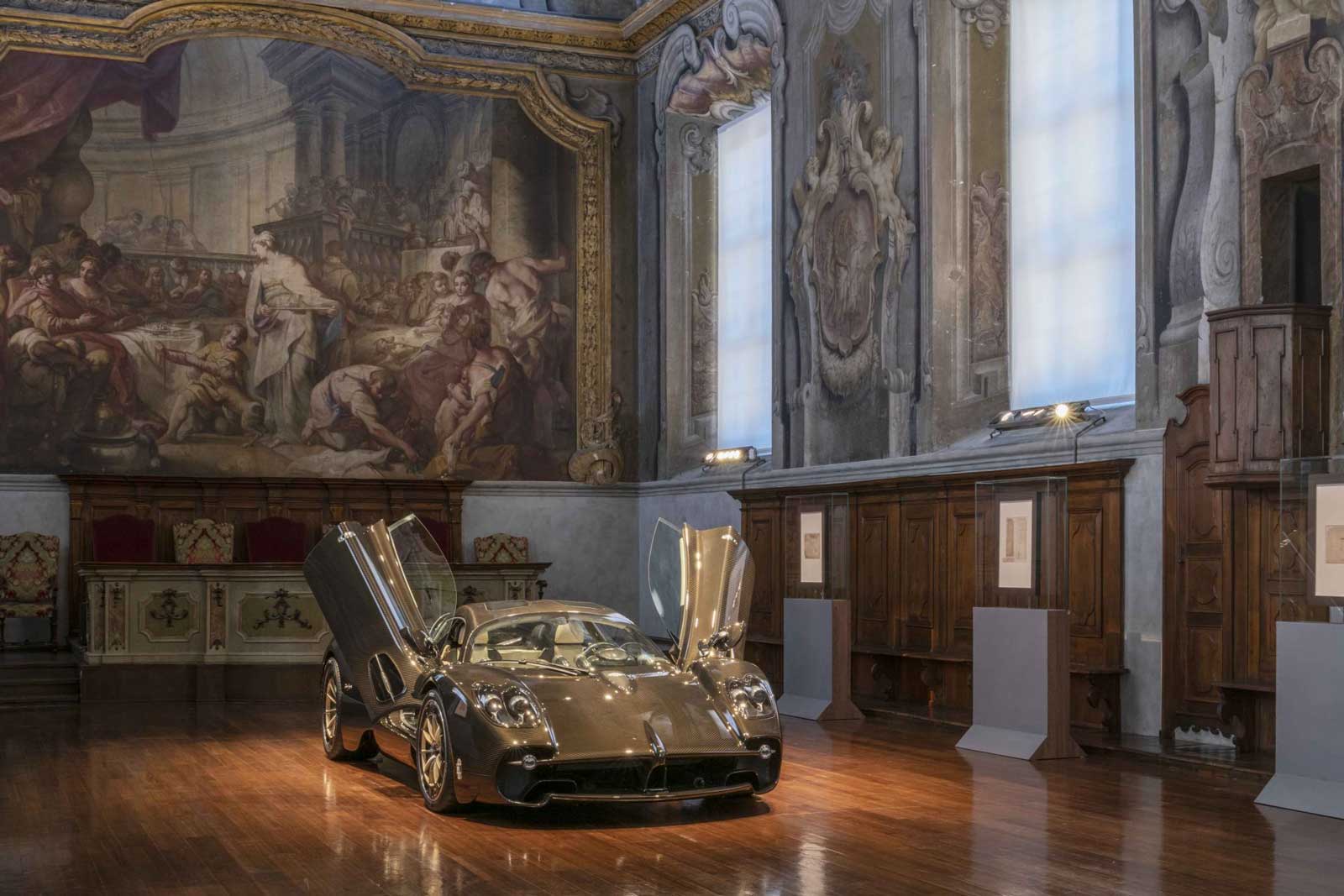 World premiere of Pagani’s new Hypercar in the splendid setting of the Museum’s Sala del Cenacolo
Six original drawings by Leonardo da Vinci, loaned on an exceptional basis by the Biblioteca Ambrosiana, provide the backdrop for the Pagani Utopia
For the unveiling, a special exhibition “The shape of air: from Leonardo to Pagani Utopia” scientifically curated by Pietro C. Marani, author of numerous publications on the artist. A dual exploration of the Italian polymath’s studies on air and the genesis of the Pagani Utopia
A common element: the close connection between Art and Science, the Leonardian principle that inspires the philosophy of Horacio Pagani, Pagani Automobili Founder & Chief Designer

Milan, 13 September 2022 – Italy’s National Science & Technology Museum in central Milan is the venue for the official debut of the new Pagani Hypercar, the vehicle that will write the third chapter in the brand’s history, with the title: Pagani Utopia. In the splendid setting of the Sala del Cenacolo refectory hall, surrounded by original drawings by Leonardo da Vinci, the Modena-based atelier’s latest creation designed by Horacio Pagani embodies a visionary utopian idea of motoring, an unconventional concept romantically detached from the contemporary meaning of automobile. And it does so in the purest Pagani spirit, where the guiding element underpinning the company’s cars has always been Leonardo’s principle of Art and Science.

No better location could have been chosen to present the new arrival: Milan, the cosmopolitan city that was home to the artist, and the Museum that houses the Leonardo Galleries, the world’s largest permanent exhibition on Leonardo da Vinci – engineer, humanist and scholar of nature.

“At the entrance to the Museum, the visitor is welcomed by a phrase with a profound significance: Scienza è Cultura – Science is Culture. The expression represents the very essence of the Museum as a place dedicated to Leonardo da Vinci and, like the artist himself, condenses the interrelations between different but complementary branches of knowledge, which, together, help us understand reality. This dialogue between art, science and technology is a distinguishing feature of the Museum’s identity. Furthermore, the discovery and invention that never cease to surprise us are combined with the fundamental ability to design and build, thus giving concrete value to human ingenuity,” says Fiorenzo Galli, General Manager of the National Science & Technology Museum.

Enhancing the ties between the design of Pagani Hypercars and Leonardo da Vinci is an exceptional loan from the Biblioteca Ambrosiana, which, for the presentation of the new car, has granted permission for six original drawings of Leonardo’s studies on air, to leave its vaults on a temporary basis for the exhibition “The shape of air: from Leonardo to Pagani Utopia”.

Curated by Pagani Automobili and Pietro C. Marani, a leading expert on Leonardo da Vinci and author of numerous books about the Tuscan artist, the exhibition offers visitors the opportunity for dual exploration. On one hand, the astonishing genius of a man with the ability – six centuries ago – to represent even the invisible, displayed in a collection of leaves from the Codex Atlanticus on the study of air and its applications; on the other, the thinking that led designer Horacio Pagani and his team to conceive the Utopia project.  A binary vision of form and function.

“The presentation of our new car in the extraordinary setting of the National Science & Technology Museum in Milan has a special significance,” says Horacio Pagani. “Leonardo was very creative here in Milan, where he enjoyed a wonderful period. He has been a huge influence in my life since I was a boy, he is the inspiration for the fundamental concepts of Art and Science that guide our work. So to be in the museum that bears his name and to have his original drawings next to our car is a truly indescribable emotion for me.”

Visitors will be able to trace the genesis of the Pagani Utopia project on a series of special panels: from the sources of inspiration to the first sketches of the car, the colour palette and the materials used, condensed in a three-dimensional moodboard. The creative route reaches its culmination in the Sala del Cenacolo for a close-up look at the new Pagani Hypercar. From the outside, a body with soft, elegant lines built in hi-tech composite materials; inside, the powerful heart of the Pagani V12 engine.

Providing the ideal frame for the new Pagani Utopia are the six original Da Vinci drawings selected by Marani. Six works that highlight how the artist was able to represent the invisible, to depict “the existence of nothingness”, that infinite interstitial extension that surrounds all bodies, in contact with the air. Together with water, air is one of the four elements (including earth and fire) that most intrigued Leonardo, whose movements and manifestations he strove to portray.

“A thread links Leonardo’s observations and his insights into aerodynamics with the creations of Horacio Pagani,” comments Pietro C. Marani. “It’s as if the designer had finally given concrete shape to what Leonardo simply intuited about the way the air ‘forges’ and sculpts forms, which you can see, for example, in the two drawings of fortresses in the exhibition.”

The exhibition is enhanced with a section entitled “Story of a Dream”, the adventure of the young Horacio Pagani who came to Modena from Argentina with an ambition: to create the most beautiful cars in the world. Guests will be able to judge for themselves whether that dream came true: in the cloisters, together with the new Pagani Utopia, two historic models will be on display – the Zonda C12 (1999) and the Huayra Coupé (2011) – to tell the story of a brand that will soon be celebrating its 25th anniversary.

The musical accompaniment to the exhibition is an interesting symphonic work written by the Milan Conservatory starting from the compositions for piano of the young Horacio Pagani, which is now the soundtrack of the new Pagani Utopia.