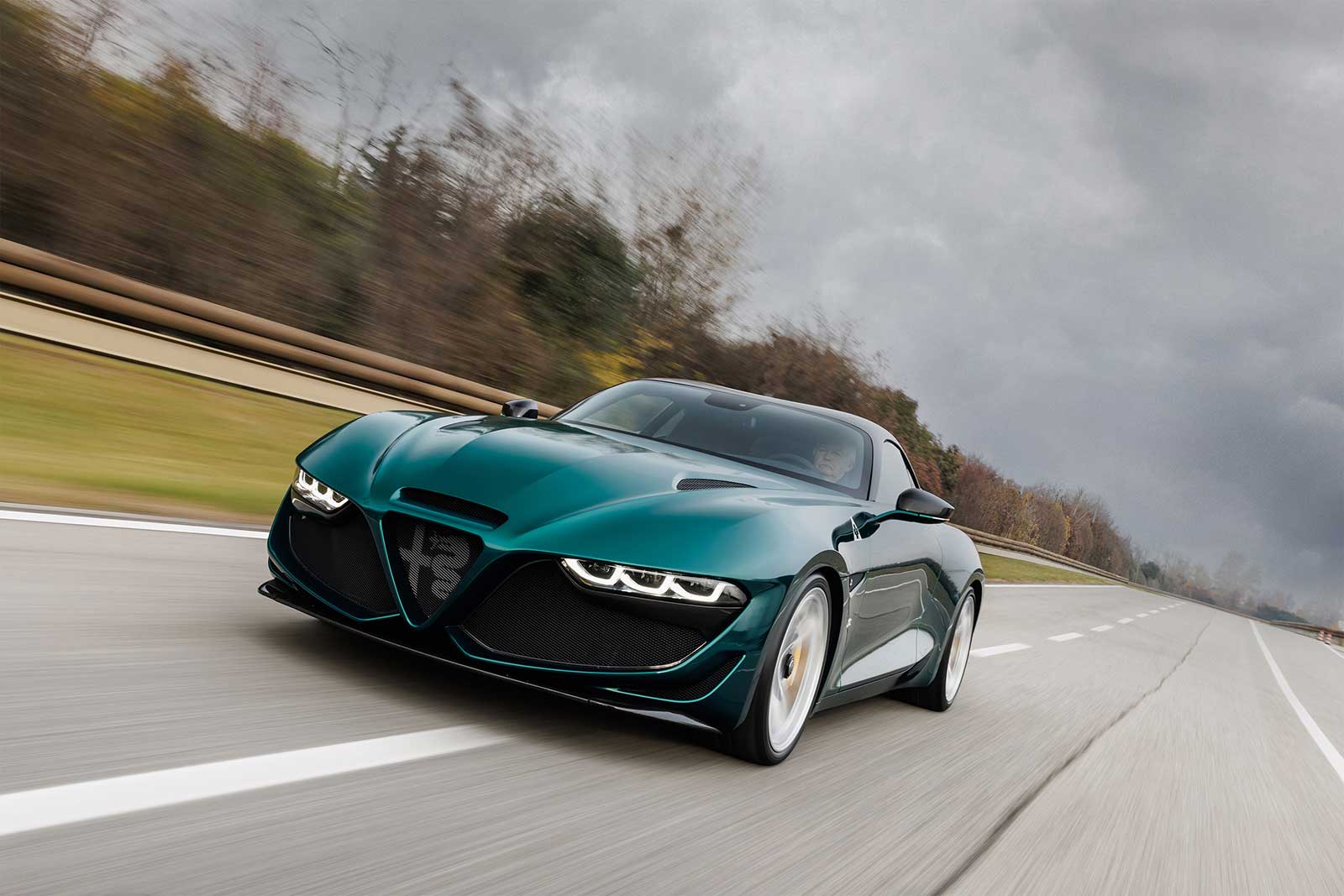 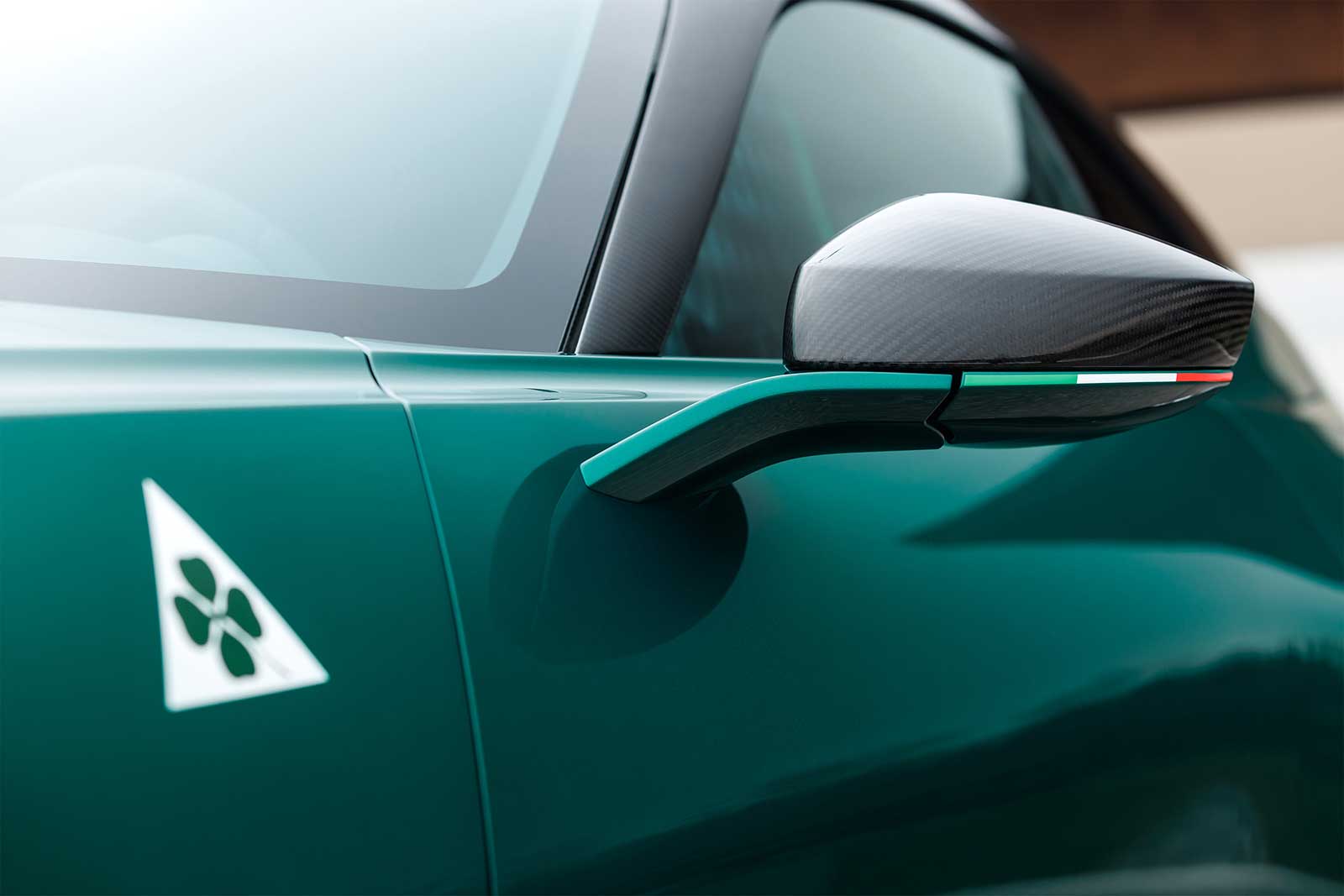 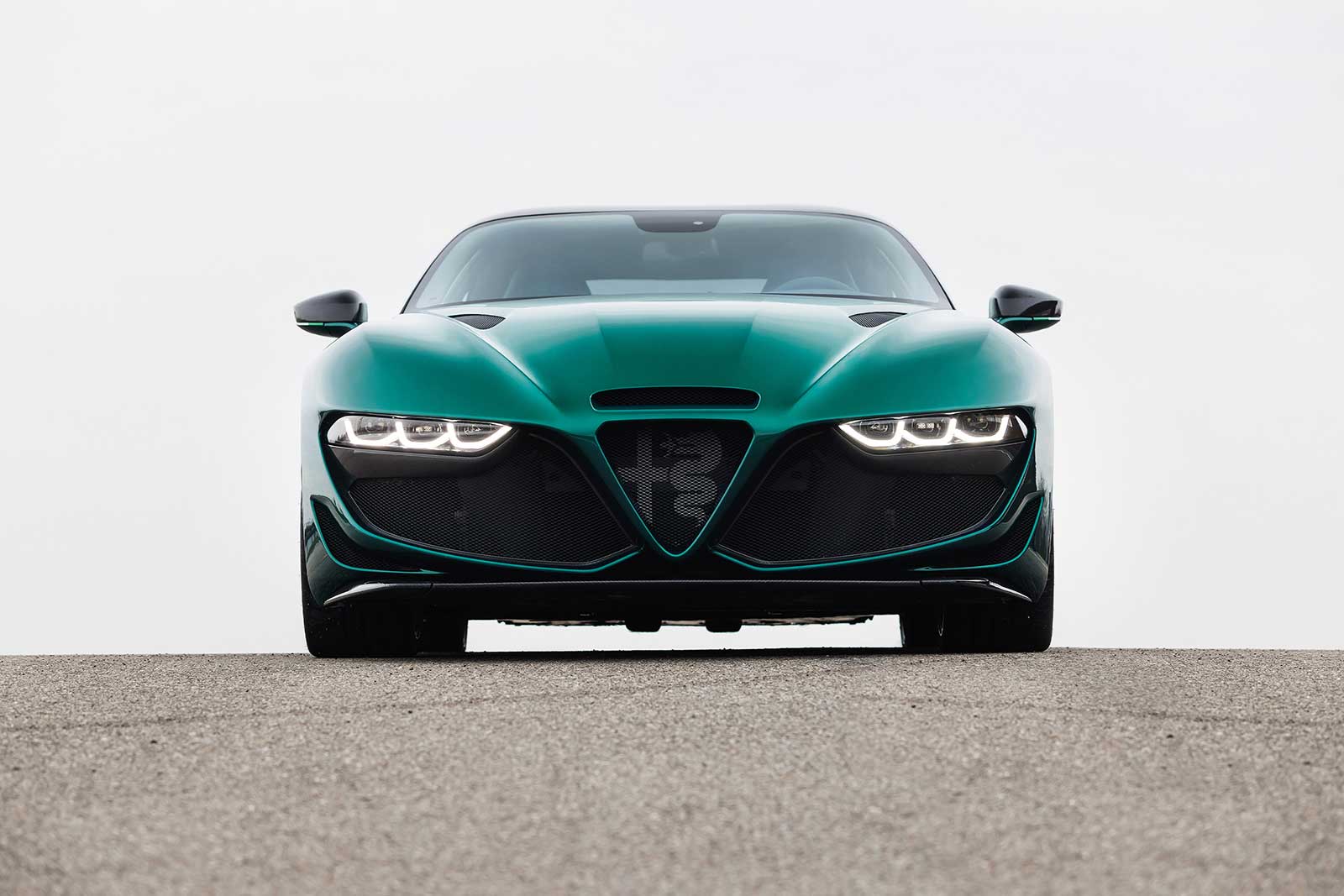 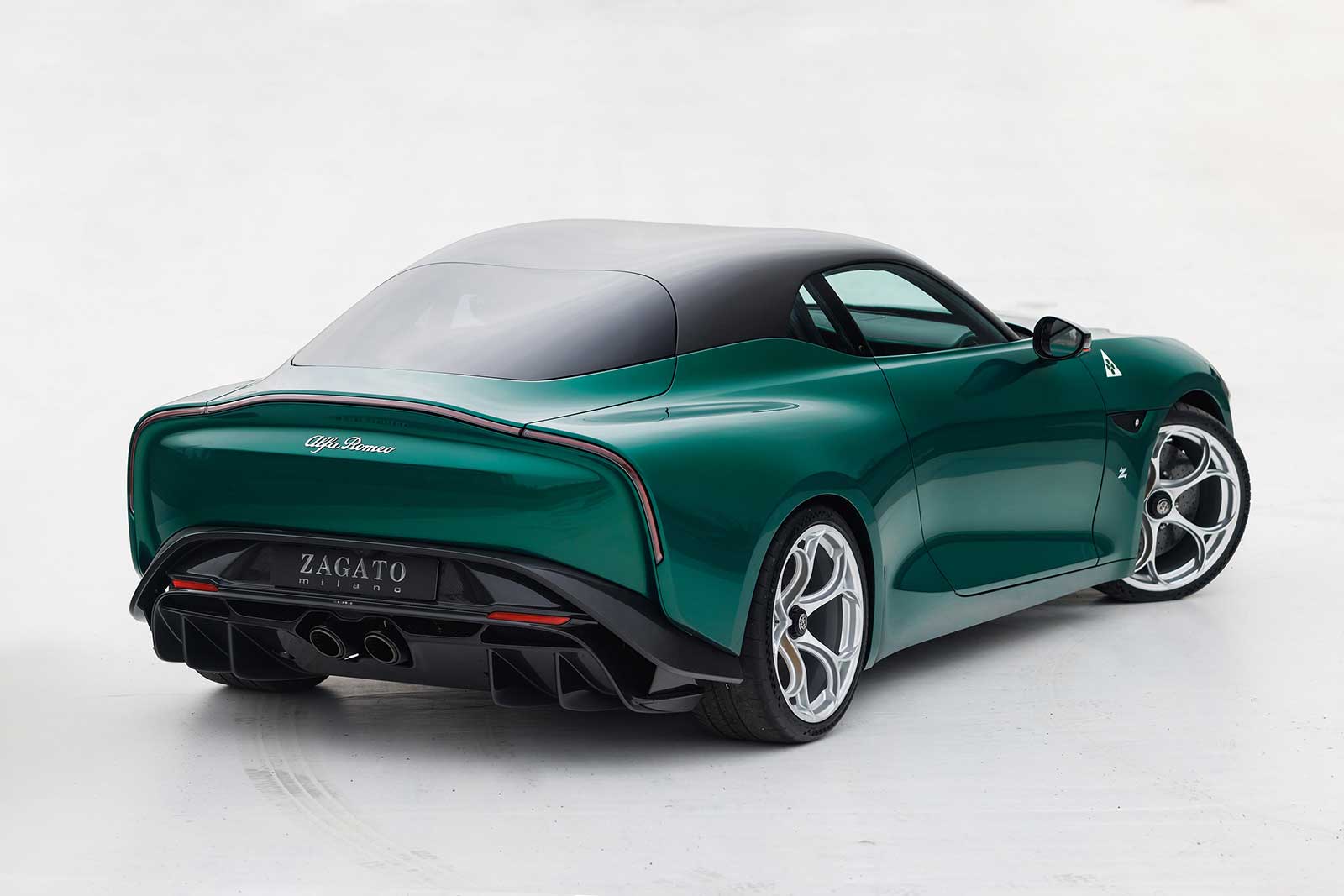 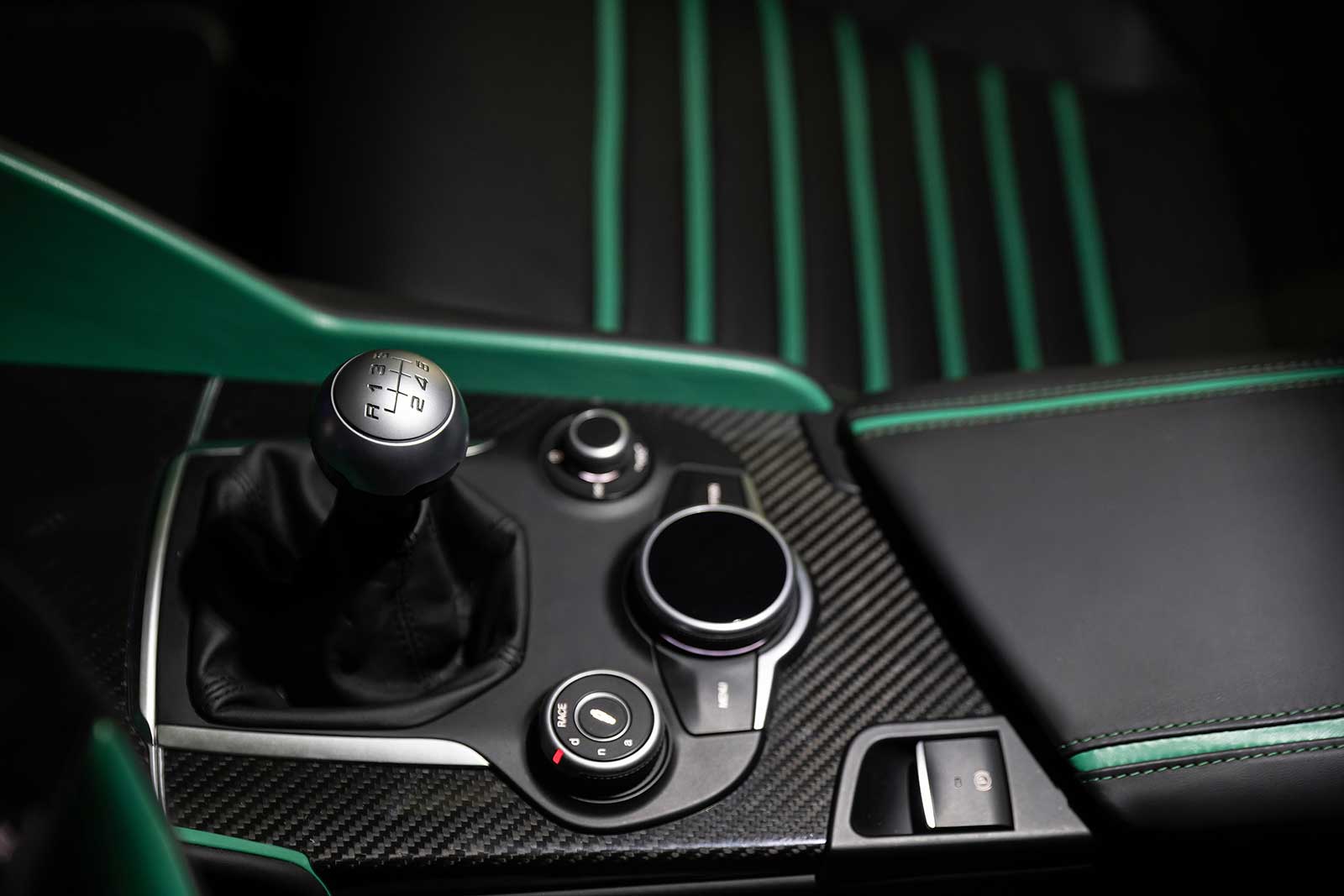 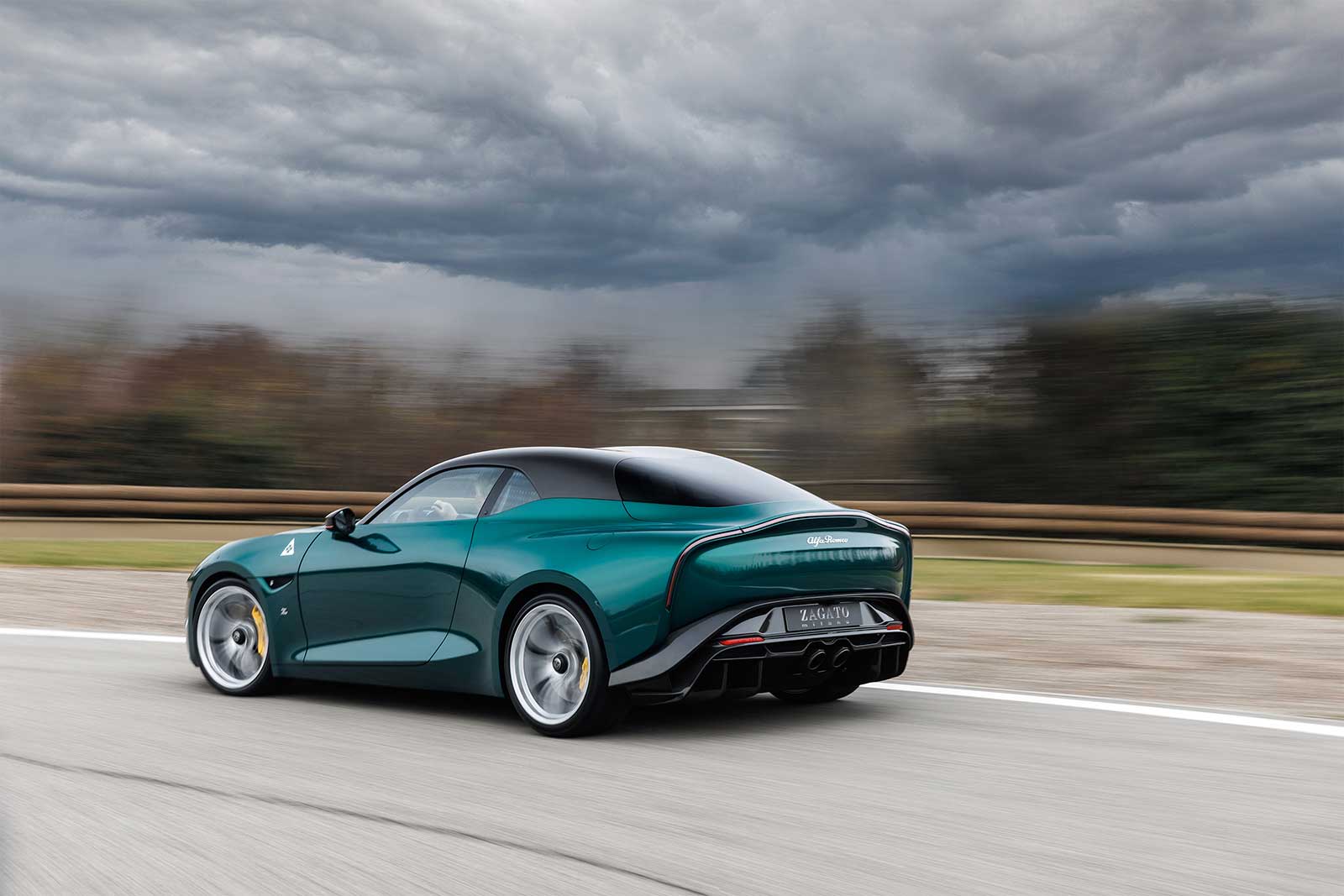 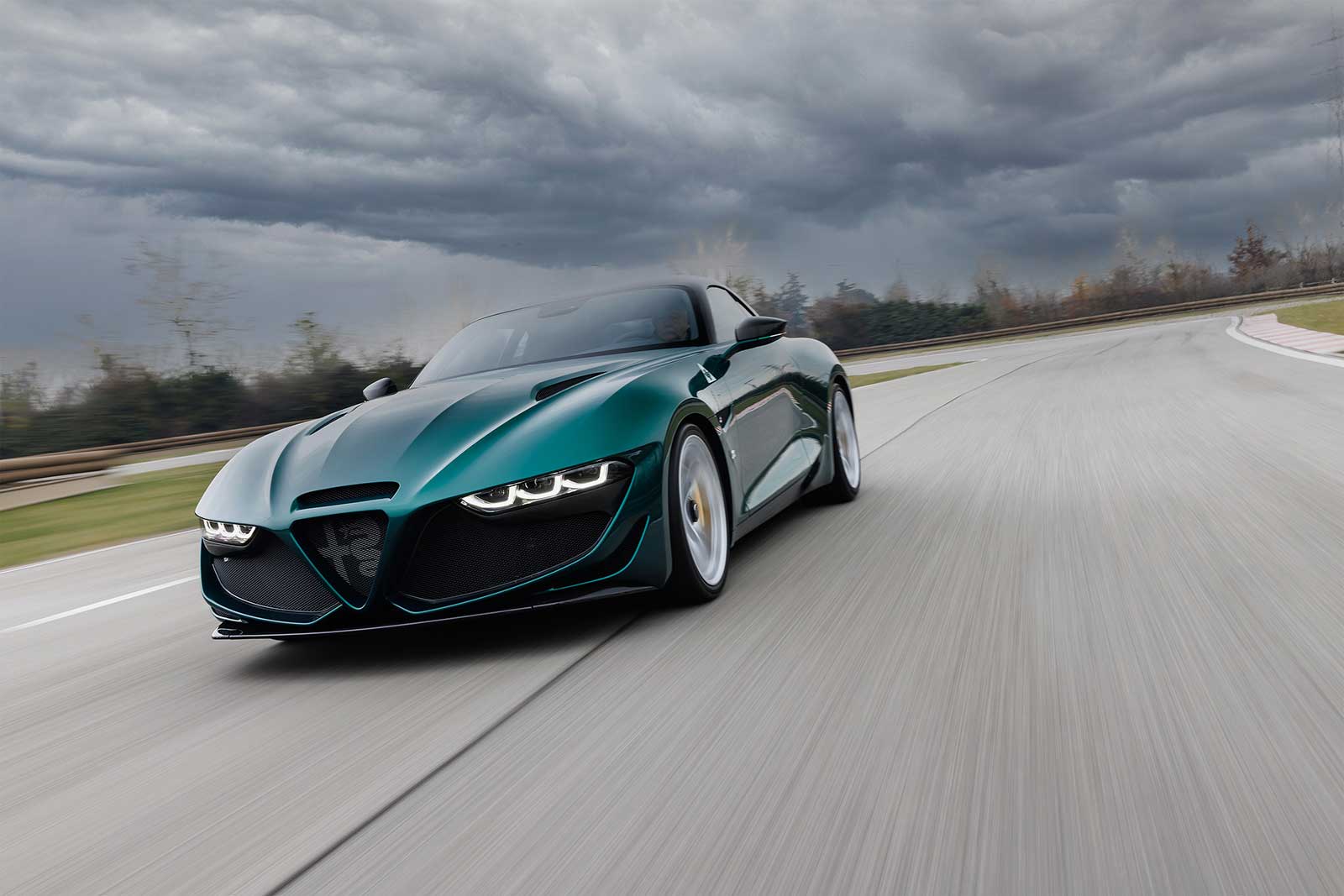 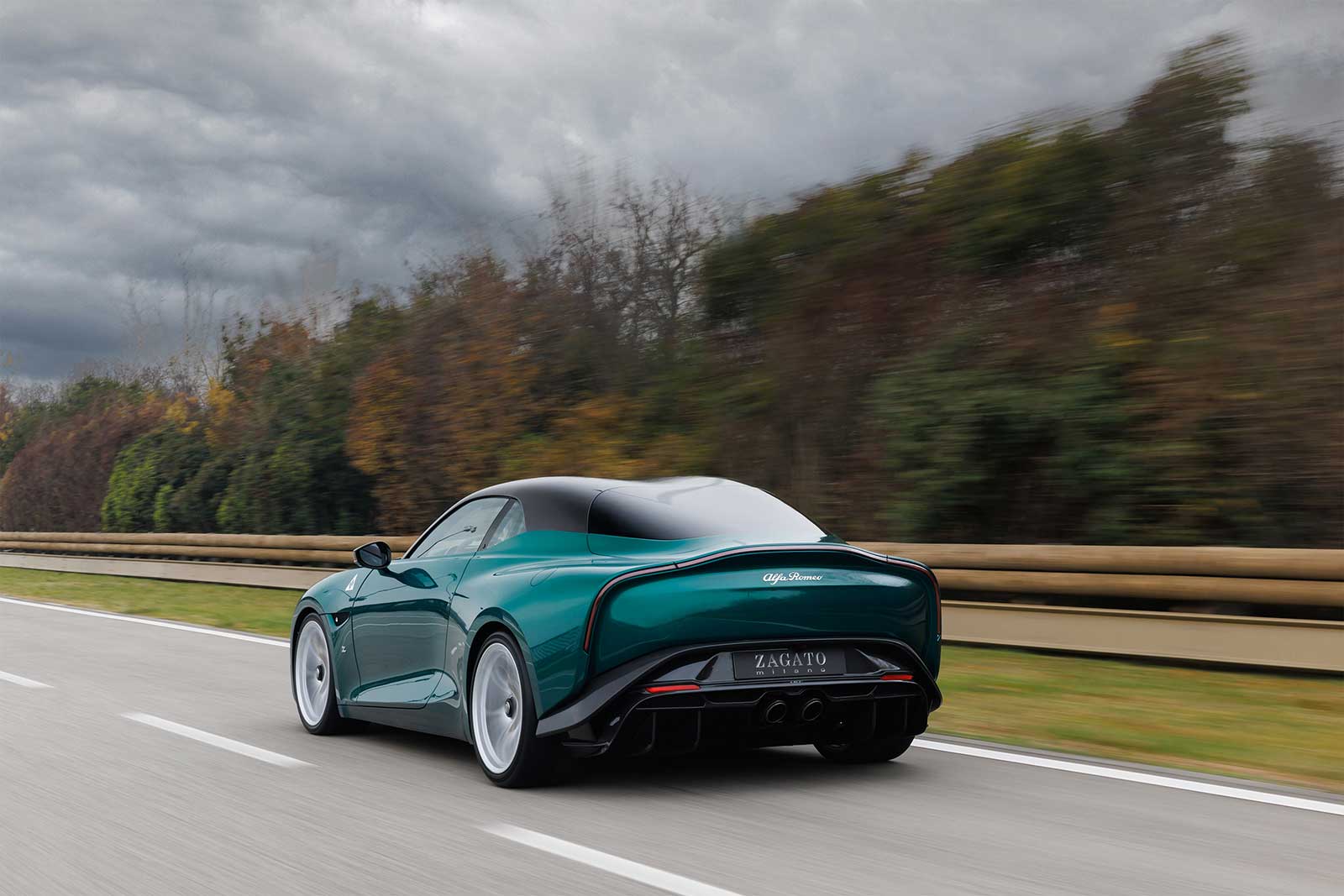 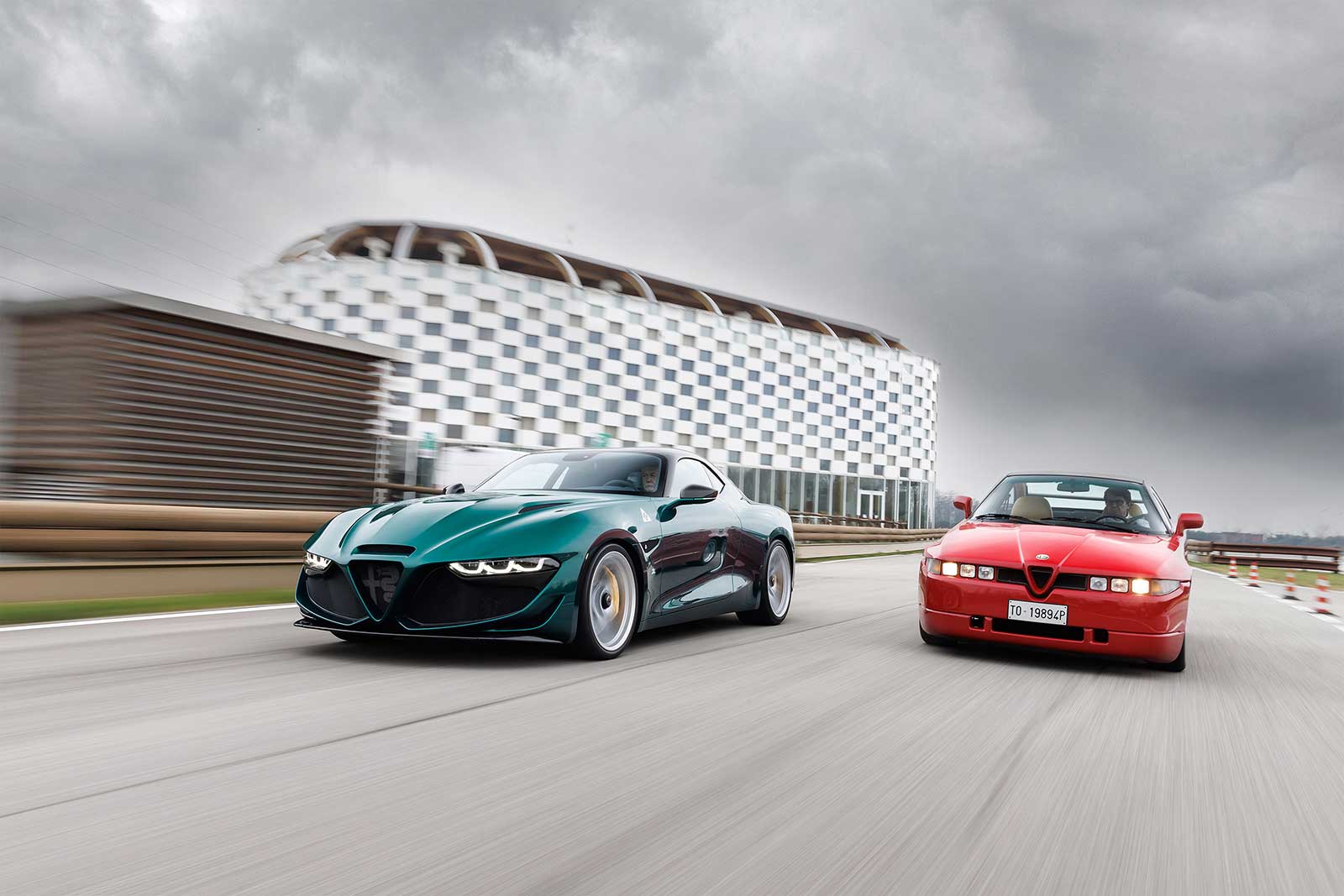 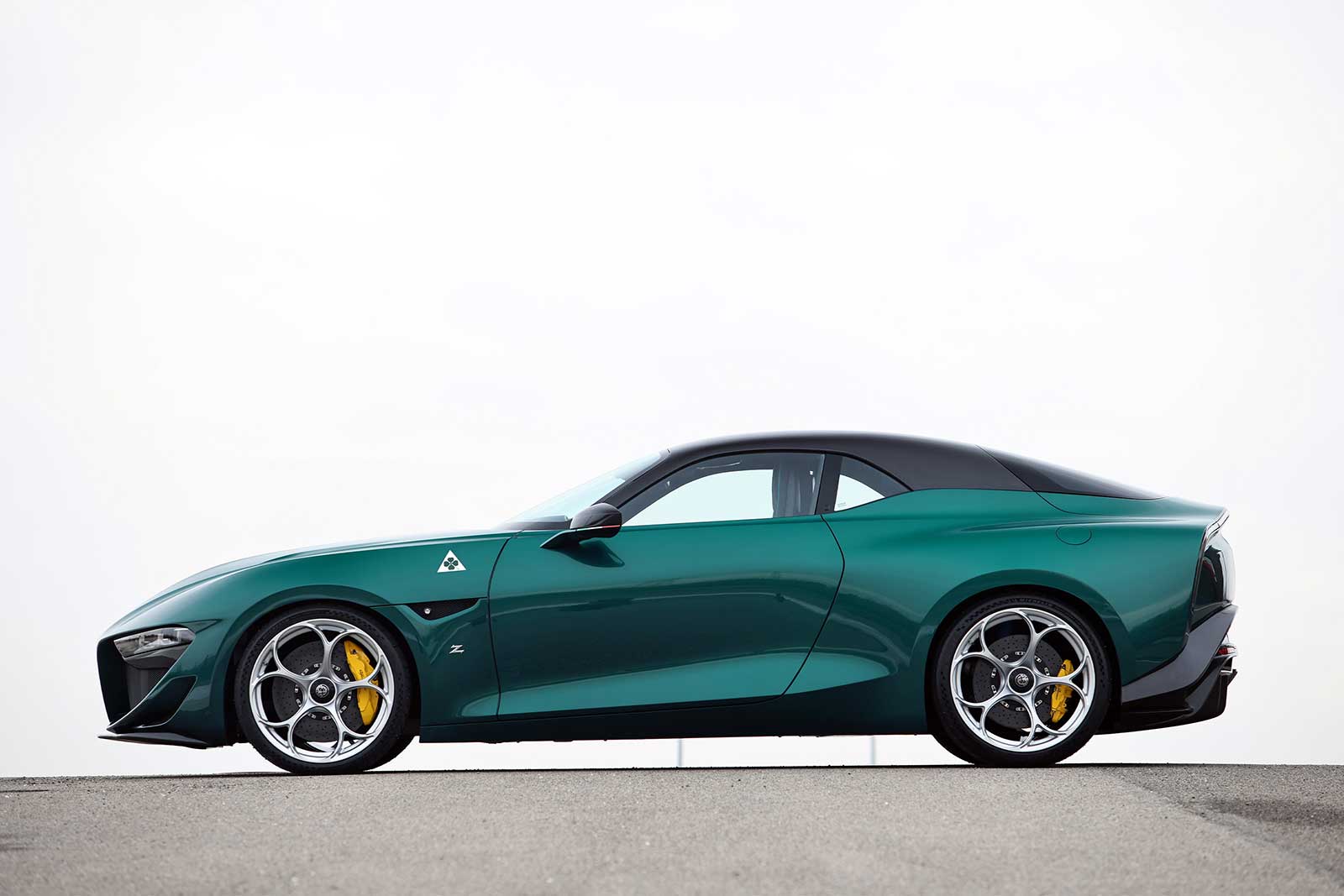 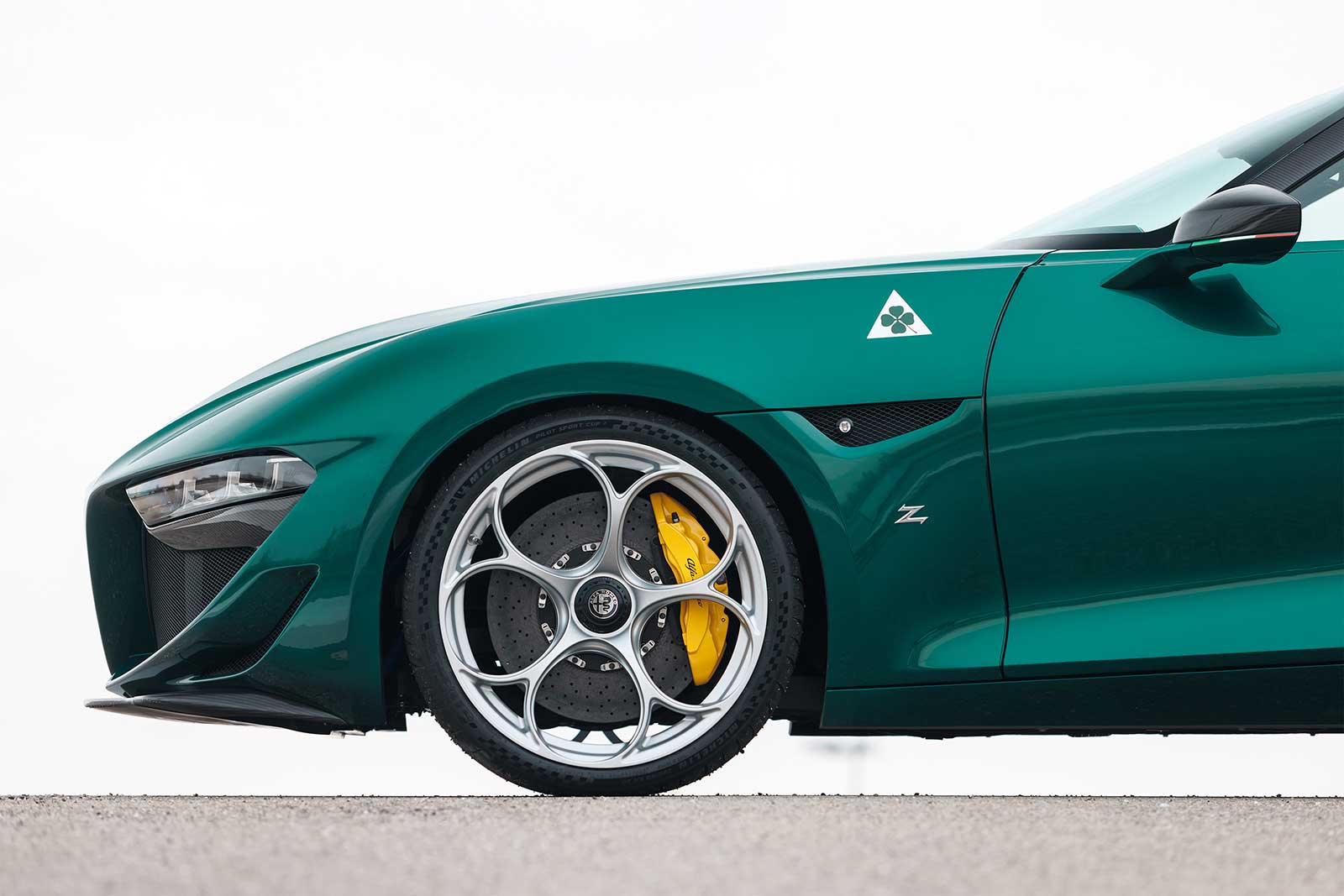 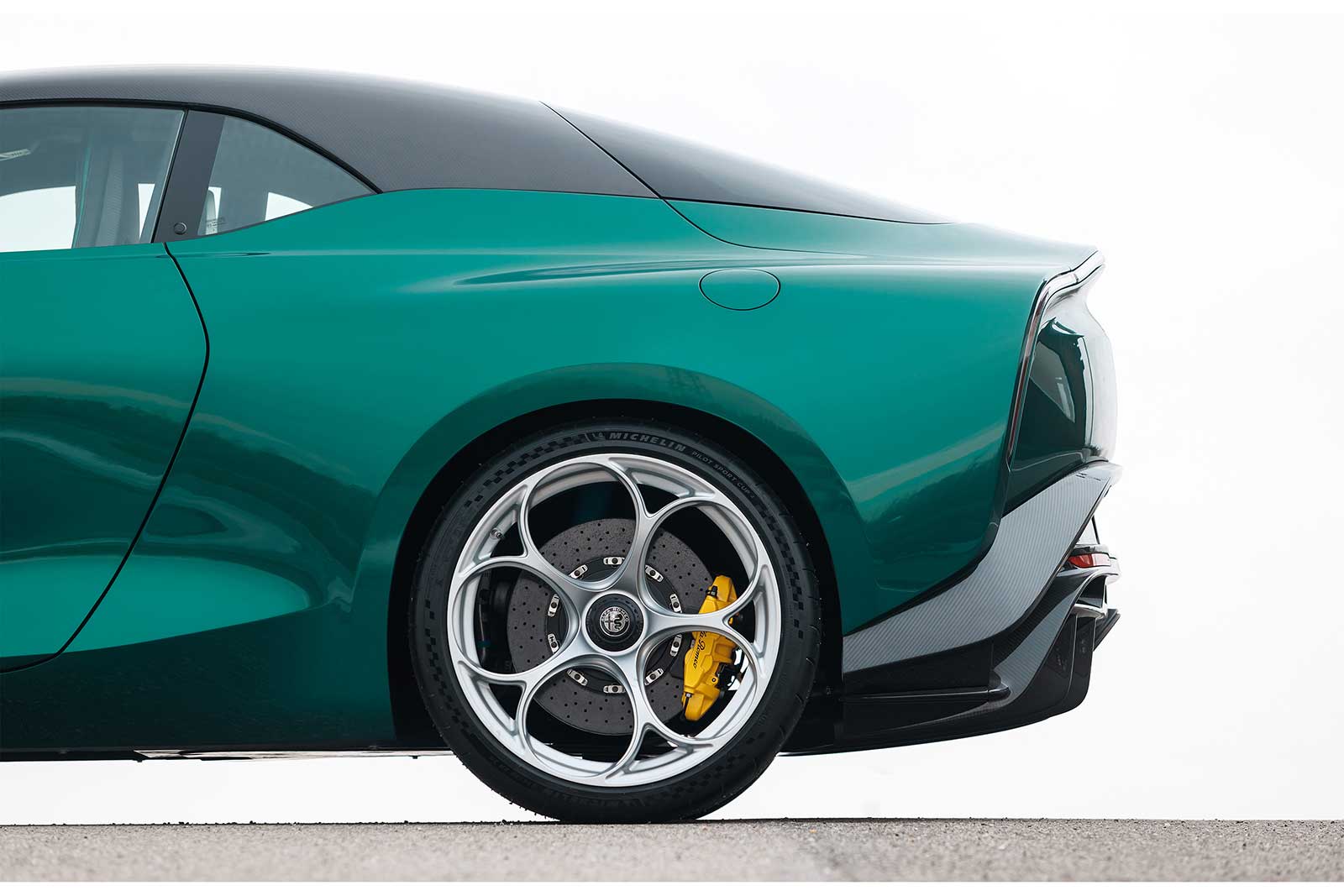 In 2021, as part of the centenary celebrations for the collaboration between Alfa Romeo and Zagato, which began in 1921 with the TIPO G1, the Milanese Atelier chose to commemorate this important anniversary with the creation of a new model.

The idea was to celebrate the current Alfa Romeo production of Giulia and Stelvio, together with the legendary 6-cylinder engine in its latest GTAm evolution with a two-door Coupé Zagato body in carbon fibre and a shortened wheelbase.
The project immediately met with the interest of a German customer, selected from among Zagato collectors, with many Alfa Romeo in his garage including, in addition to a rare 8C Competizione, all the different models of the Alfa Romeo’s recent era.

As a fan of Granturismo Zagato models, he drives regularly an Alfa Romeo S.Z. (1990) but also several Aston Martin Zagatos of the latest generation.

A perfect DNA, therefore, to christen this new chapter in the legendary history of the two Milanese companies and, to add a further touch of exclusivity, the project started from the Giulia Quadrifoglio Manual updated by Zagato in its contents to the GTAm, to retain the 6-speed mechanical gearbox.

As far as design is concerned, if for the 100th anniversary of Alfa Romeo's foundation (1910-2010), Zagato chose the 'TZ' theme, creating the TZ3 Corsa with 8C engine - winner at Villa D'Este - followed by the TZ3 Stradale based on the Chrysler Viper and immediately named by the international press as the first American Alfa Romeo, for this new double anniversary the theme was instead 'SZ'.

TZ and SZ boast two different design languages but both dress the Zagato concept of Granturismo. The design of the prototype Giulia SWB (short wheelbase) Corsa, is, therefore, a natural evolution of the Alfa Romeo SZ models starting with the Codatronca version, born in 1961, and which dominated its GT Class in 1962 - 1963 up to the more recent S.Z. whose front end inspired the front treatment of the very recent Tonale.

Unlike the S.Z. of 1990, based on the Alfa Romeo 75 Evoluzione, which did not have a shortened wheelbase, this new prototype was named "SWB" because it was developed in-house by Zagato from the Giorgio modular floorplan of the Giulia and Stelvio, optimizing its overhangs and wheelbase, in keeping with Zagato's sporting tradition.

The design process was carried out according to the Zagato idea of teamwork, enlisting the support of Alejandro Mesonero (Head of Alfa Romeo design) and his team from the outset.

The conception, development and production of the car were, however, carried out entirely and independently by the Milanese Atelier without external support. The presence of the Alfa Romeo badge on the car is solely for descriptive and promotional purposes and Zagato's choice to draw inspiration from the Alfa Romeo S.Z.

The car, after the photo shoot on the 'La Pista' circuit in Arese, will then be officially handed over to the customer, to round off an important year for Zagato and seal a collaboration that over the course of more than 100 years has given rise to more than 150 models of the highest collectors' value.

"We chose for the shooting 'La pista' circuit in Arese - formerly Alfa Romeo - where the Giulietta SZ and Giulia TZ were born. This track and the nearby Museum are places that bear witness to how Alfa Romeo is the origin of Italian motorsports - and also baptized Ugo Zagato and Enzo Ferrari. We are extremely satisfied with the collaboration we had throughout this period with Centro Stile Alfa Romeo, the teamwork was perfect, also with the Marketing and Communication department. It has been an exhilarating experience that has confirmed how the combination of Alfa Romeo and Zagato is an absolute classic of collecting".

For its centenary, Zagato has created a new 'one-off'. The result is a car that fits perfectly into the historical path of the two marques where the first objective was and is to combine beauty with performance.

Alfa Romeo "SZ", an acronym that evokes emotions, roots its origins in the deep history of coachbuilding, that of cars made with the sartorial care of those who dress a mechanically in a special way according to the thought, the culture of those ateliers that, like Zagato, in this case, have interpreted the "biscione" brand.

The philosophy of this new 2023 SZ is that of the 1960s, with a body driven by simplicity, aerodynamics and lightness.

The new SZ offers a dynamic, simple body, where long lines run from the front to the rear where creating 'a strong but discreet muscularity at the same time.

The front end is characterized by the 3+3 headlamp concept widely seen on the new Alfa Romeos, but also on the SZ of the 1990s. The cabin, totally in carbon, re-proposes another characteristic element of the brand with the two humps on the roof in search of height reduction, improving aerodynamics without affecting interior ergonomics. At the rear is the 'truncated tail', a typical Zagato body style solution, aerodynamic and visually powerful As Centro Stile, we are happy to have supported Zagato by contributing to the design of this car, which with this 'one-off' has chosen to celebrate its historic bond with Alfa Romeo.

"In the more than the 100-year glorious history of Alfa Romeo, no other company has contributed as much as Zagato, through 100 years of long and tireless collaboration. The way the two companies work together changes with the times, but their shared passion for creating design marvels has always paved the way for new eras. As is well known, the coachbuilding industry in Italy has always relied on engines and chassis produced by car manufacturers, equipping them with unique bodywork. With the new Alfa Romeo Giulia SWB Zagato, this relationship has taken a further step forward: the Alfa Romeo Design Centre and Zagato have worked together passionately since the early days of design work. Alfa Romeo assimilated Zagato's DNA while we sought to apply the future direction of the Biscione brand's styling cues.

What our collaboration has achieved in developing the design of this new Alfa Romeo Giulia SWB Zagato, which in today's fast-moving automotive world is the classic task of a coachbuilder like Zagato to create a unique piece to meet the demands of passionate collectors. The relationship between Zagato and Alfa Romeo, together with the passion of the entire team of designers and engineers, proves that the long tradition can be carried on into the future".