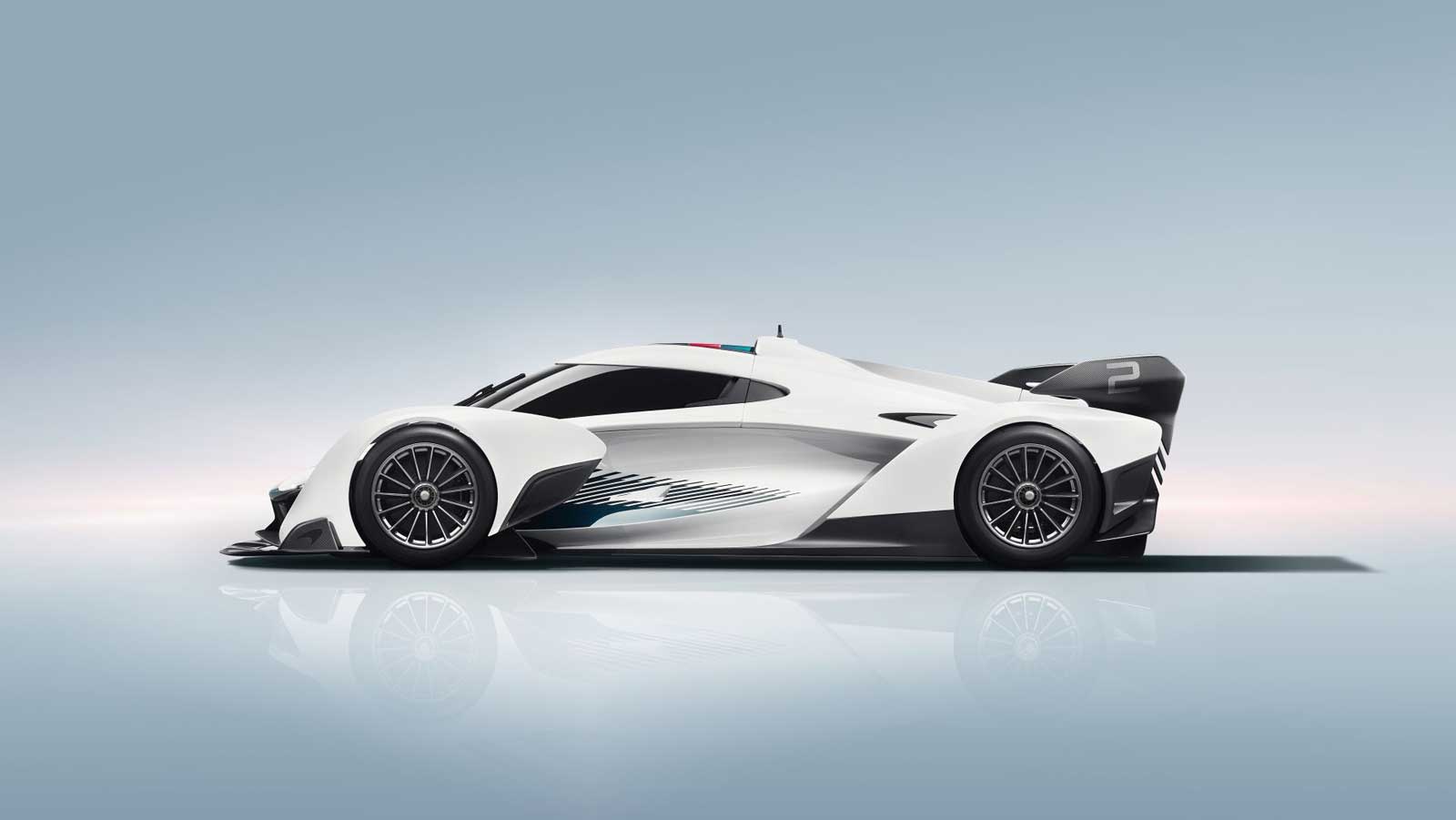 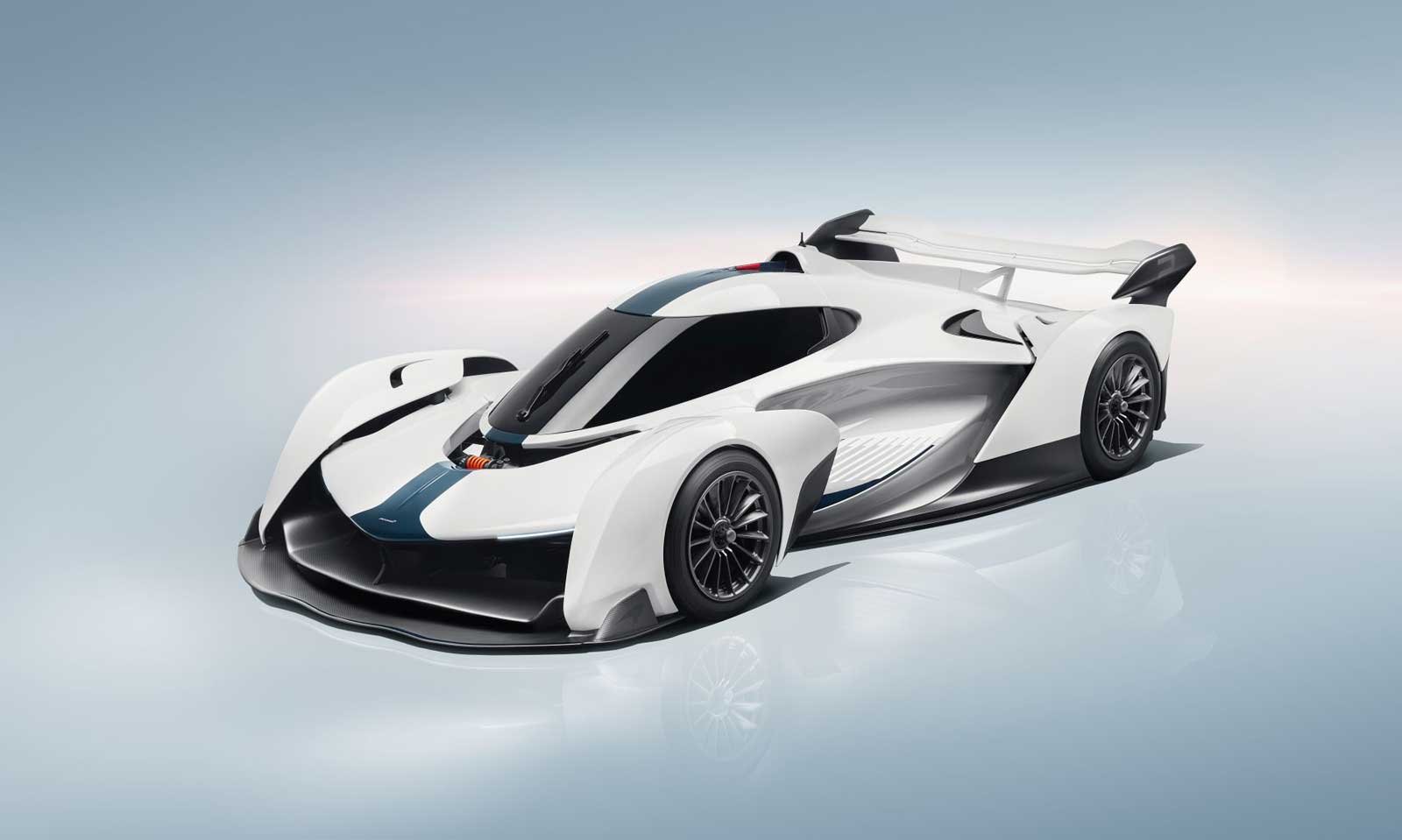 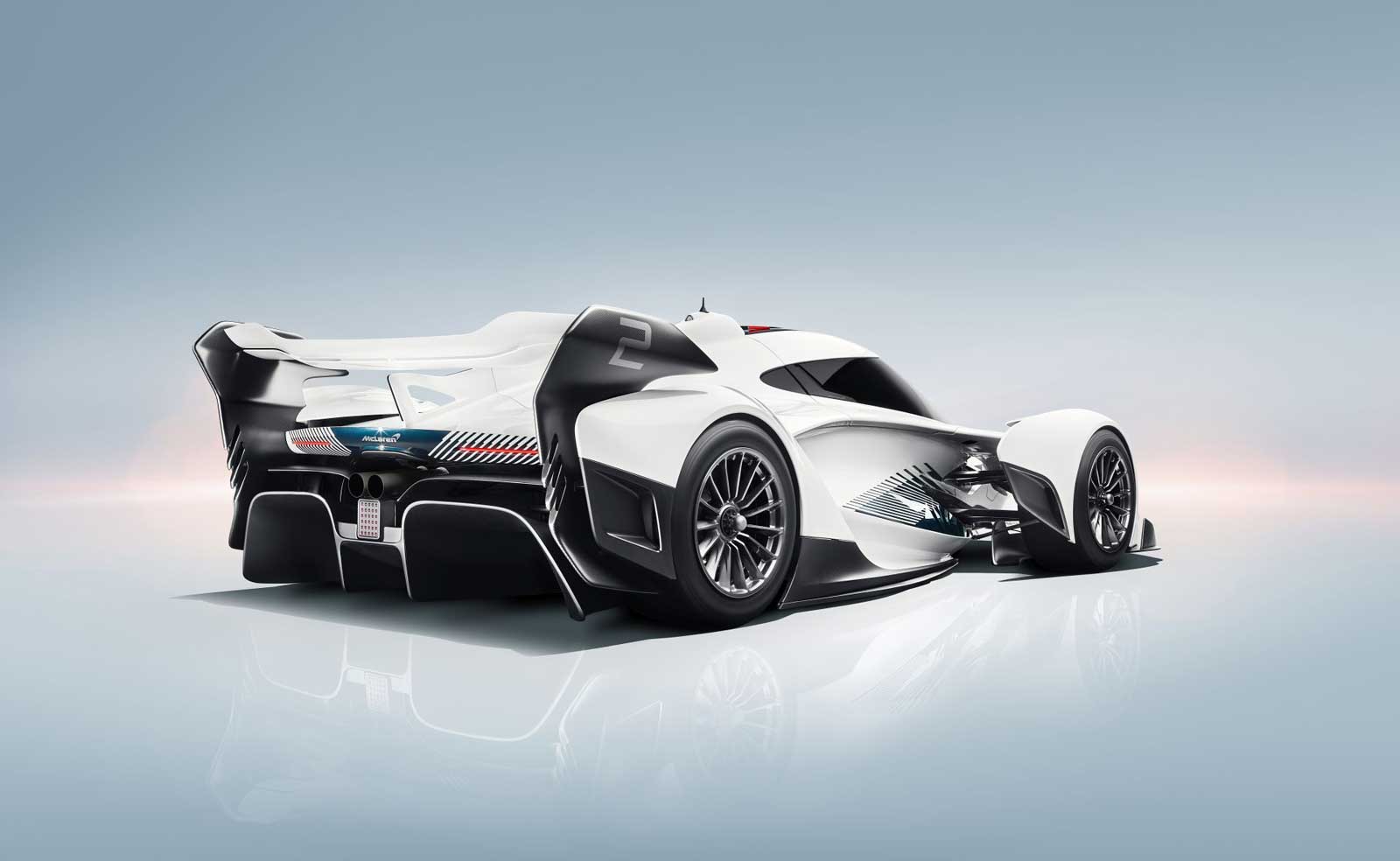 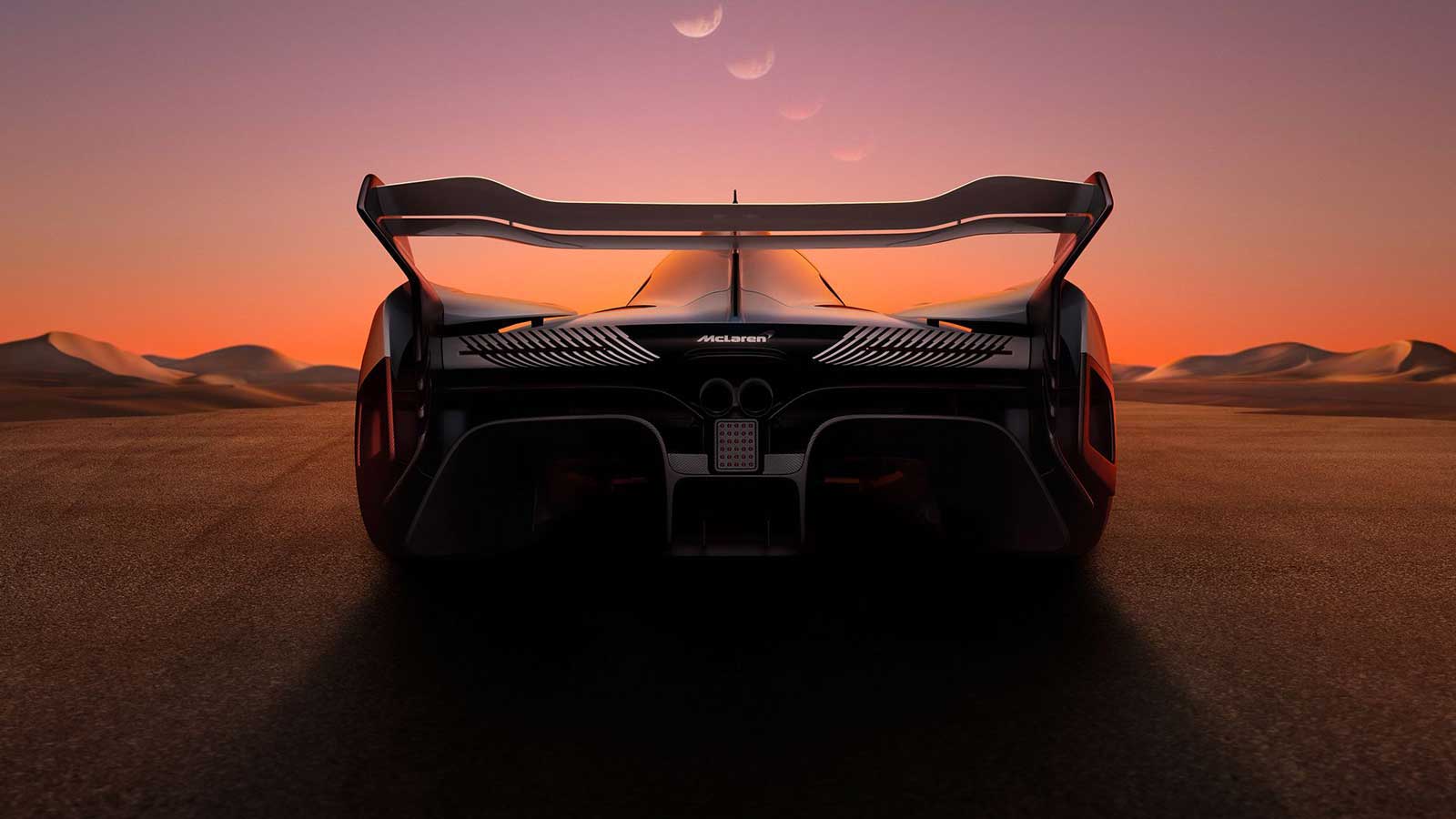 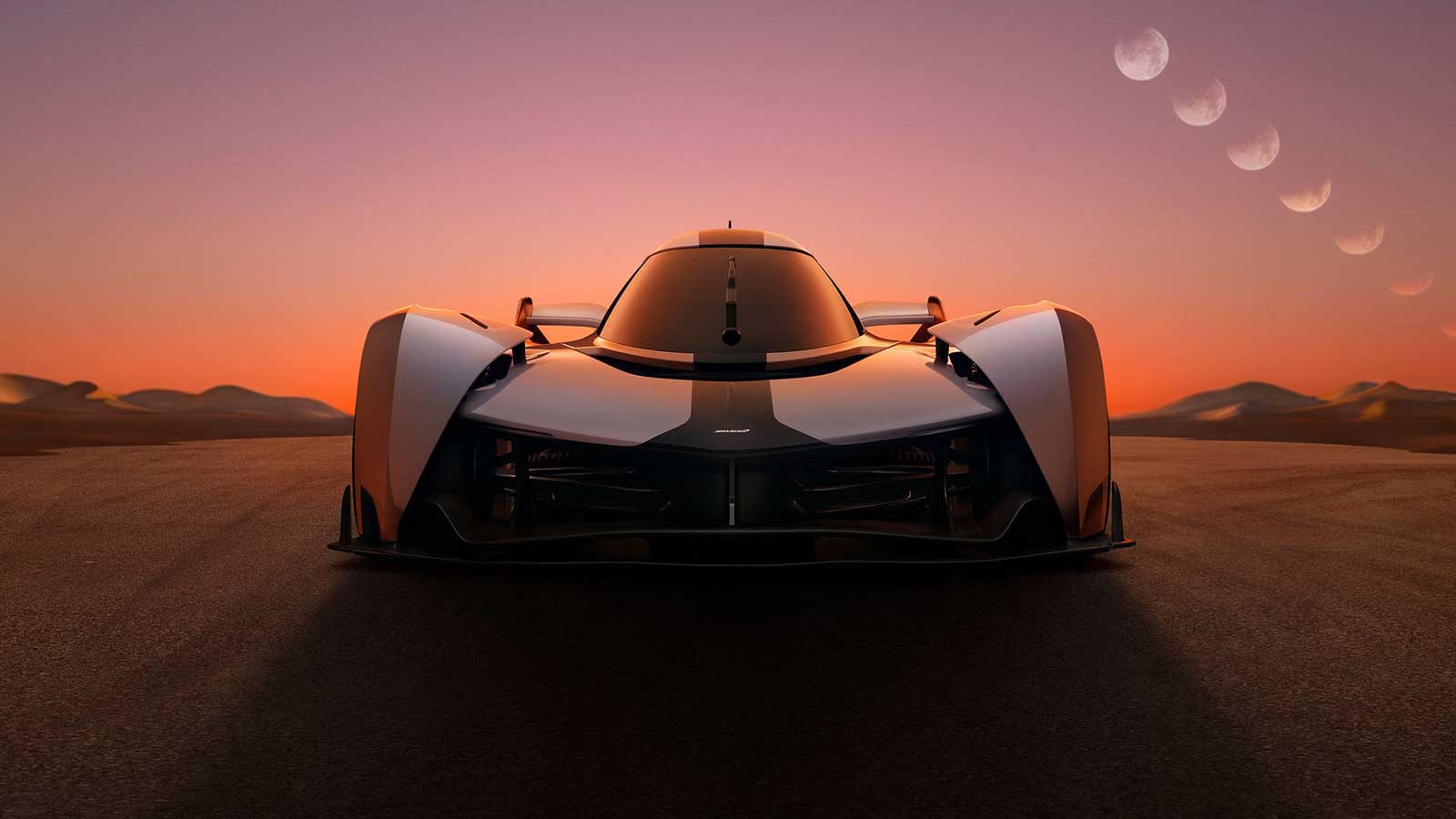 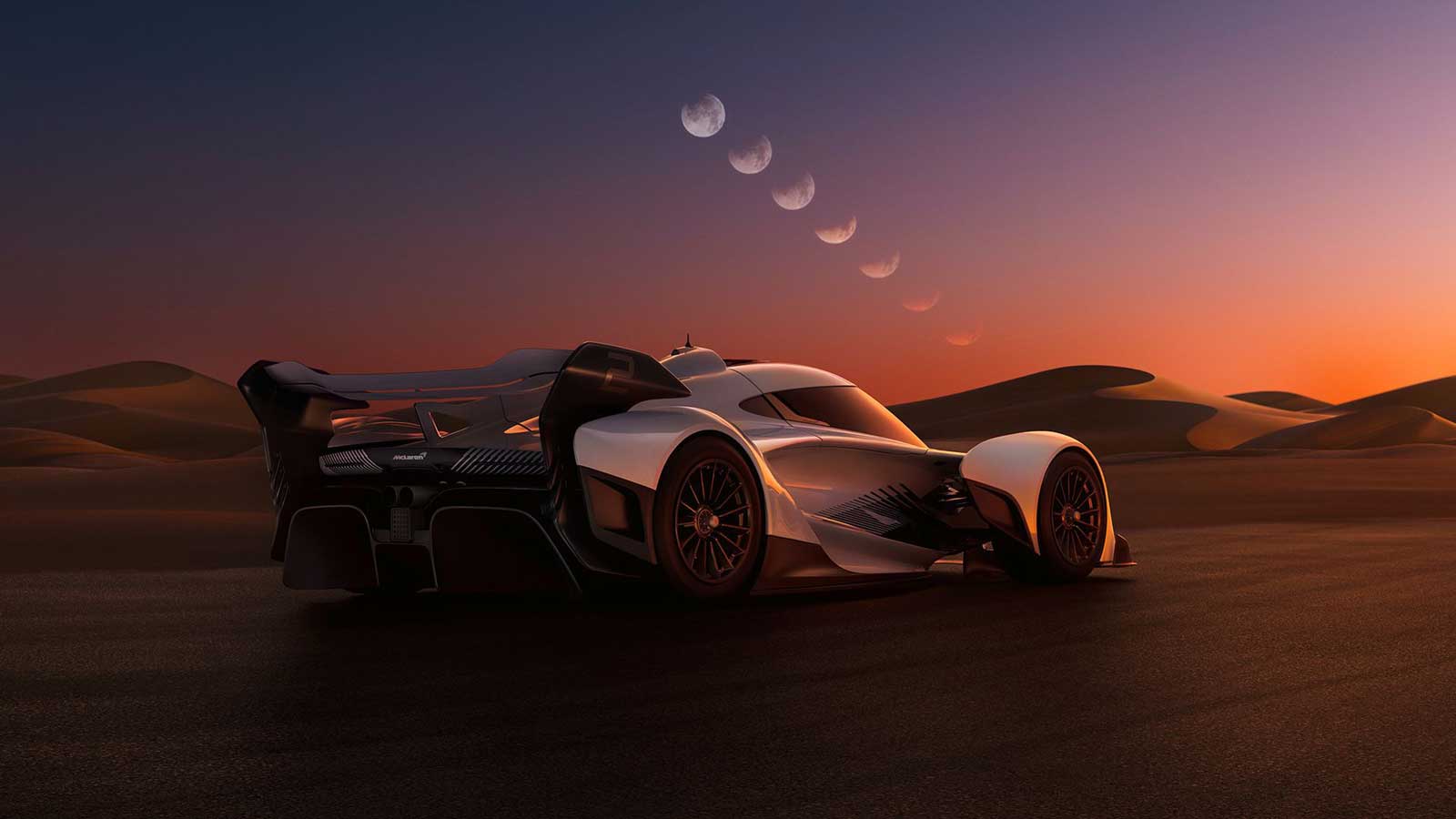 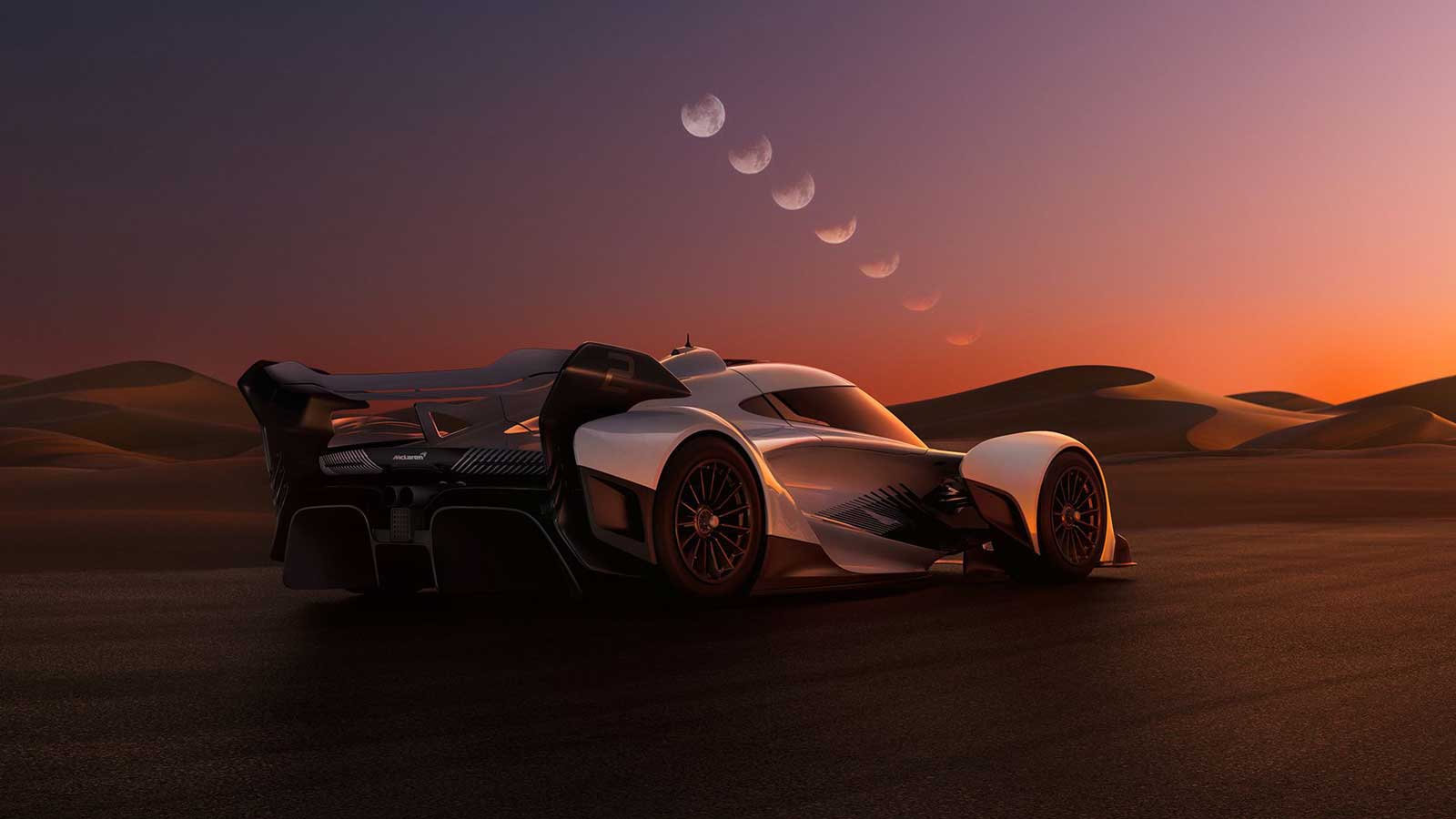 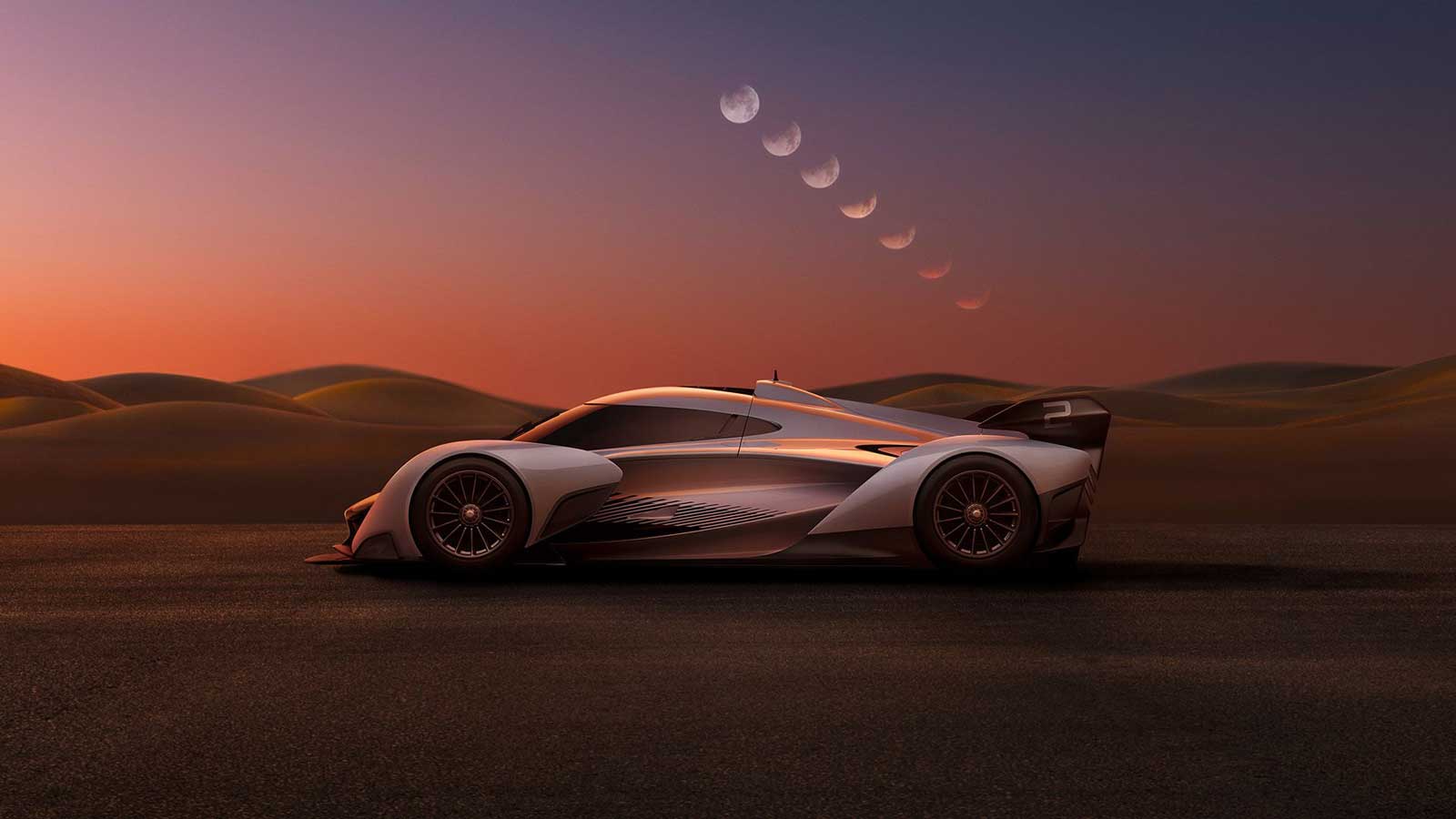 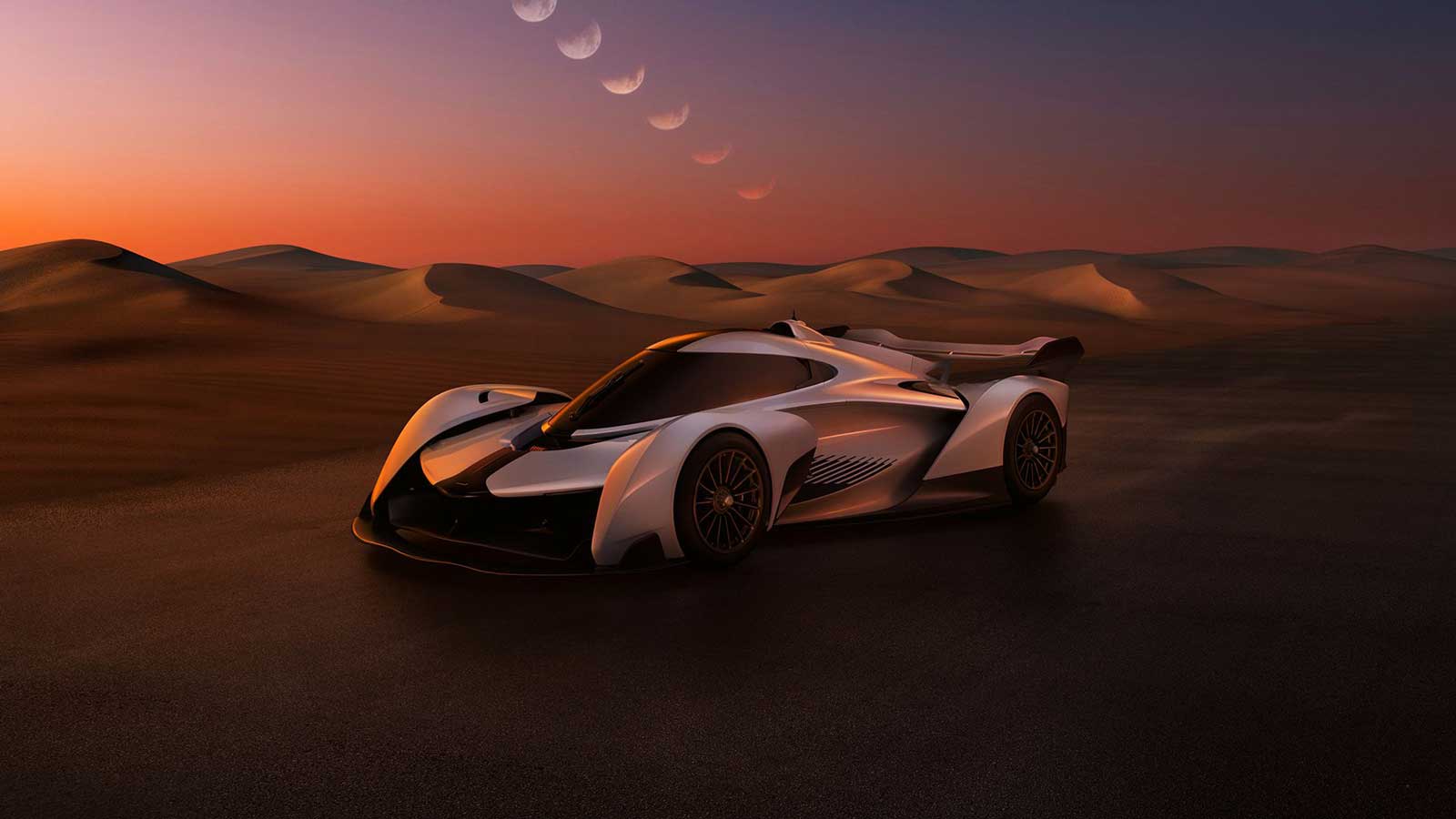 - World-first, track-only realisation of McLaren concept that debuted in the virtual gaming world
- Limited to just 25 customer cars – all sold before public reveal
- Engineered to reality using technologies from McLaren’s presence across the highest levels of motorsport and supercar and hypercar development
- Striking central, single-seat, closed-cockpit design with jet aircraft-style sliding canopy
- Unique monocoque chassis with motorsport-derived powertrain a structural element
- Naturally-aspirated 5.2-litre V10 engine and bespoke seven-speed, sequential shift gearbox
- Weighs less than 1,000kg and has more than 1,200kg of downforce
- V10 engine revs to more than 10,000rpm and produces in excess of 840PS and 650Nm
- Acceleration from 0-100km/h in a target time of 2.5 seconds and a top speed of more than 200mph
- A full ‘racing driver experience’ available, including a driving seat moulded to individual body shape, an FIA-homologated race suit, helmet and HANS (Head And Neck Support) device bespoke to each owner, and driver-development coaching programme
- First cars will be delivered to customers in 2023
- McLaren Automotive today reveals the McLaren Solus GT, the stunning realisation of a concept car from the screens of virtual racing into an extreme expression of track driving engagement that will exhilarate in the real world.

Engineered to reality by drawing on the full range of McLaren’s experience and expertise across the highest levels of motorsport and supercar and hypercar development, the Solus GT brings to life the futuristic McLaren concept that featured in the Gran Turismo SPORT video game.

At less than 1,000kg in weight and with aerodynamic performance including downforce in excess of 1,200kg, the Solus GT – which is powered by a naturally aspirated 5.2-litre V10 engine – is capable of the fastest lap times of any McLaren outside of single-seater racing and delivers a driving experience close to the engagement and sensation of driving a Formula 1 car.

“The McLaren Solus GT is the realisation of a radical McLaren concept vehicle originally created for the world of virtual racing. Engineered free of any restrictions from road or race regulations, but with the full spectrum of McLaren’s expertise to bring it to reality, it epitomises our pioneering spirit.”
Michael Leiters, Chief Executive Officer, McLaren Automotive

The striking exterior design, which is remarkably faithful to its virtual inspiration, is based on proven aerodynamic principles and McLaren’s ‘everything for a reason’ design ethos, honed by additional CFD (Computational Fluid Dynamics) and wind-tunnel aerodynamic research.

The list of distinctive external features is lengthy, with the sliding canopy above the single, central seat being one of the most striking. The wheels are shrouded in aerodynamic pods and located by suspension arms. A large front splitter feeds air into ground-effect tunnels before it exits the car via a full diffuser. A motorsport-inspired intake above the cockpit integrated into the design of the roll hoop cover feeds cold air into the engine, while also providing an engaging induction sound. Race car design also inspired the sidepods which house the Solus GT’s radiators.

A twin-element, fixed rear wing is key to a downforce figure that exceeds the overall weight of the car. The downforce to drag ratio is also optimised, aiding straight-line performance as well as enhancing cornering abilities.

The Solus GT experience begins even before the engine is started, with the driver opening the distinctive cockpit canopy that slides forward through a shallow arc to allow access. This is nothing like a conventional car door, or even the signature dihedral doors of other McLaren cars, rather more like stepping into a jet fighter plane.

The means of getting into the car adds to the sense of occasion provided by the single seat that dominates an interior focused solely on the driver and performance. The seat position is fixed – the 25 Solus GT owners experience their own motorsport-style ‘seat fitting’ – with the pedal box adjustable as in a race car, although with the convenience of a remote system operated from the seating position.

The steering wheel – the design of which is unique among McLaren production cars – takes its inspiration from Formula 1, with dash display and essential controls integrated to suit the tight confines of a single-seater track car. Beyond the steering wheel is a view through the glass ‘bubble’, with integrated halo-style cockpit protection – mounted to which is a rear-view display fed by a wide-angle camera placed within the roll hoop. The perfectly symmetrical 180-degree line of sight provided by the central driving position is further aided by the dramatically styled wheel pods in helping the driver to position the car on a track.

To further enhance the exhilaration for Solus GT customers, McLaren is offering a full ‘racing driver experience’. This includes a driving seat moulded to the driver’s individual body shape; an FIA-homologated race suit, helmet and HANS device bespoke to each owner, and radio-enabled ear inserts. A full driver-development coaching programme will also be available to help customers fully exploit the potential of their new track hypercar.

The Solus GT is powered by a unique 5.2-litre V10, constructed using low-volume, machined components, that revs to more than 10,000rpm and delivers extreme performance and thrilling driver engagement. The engine’s responsiveness is enhanced by the use of barrel-driven throttles for each cylinder – a system only suitable for track application – and is entirely gear-driven, with no chains or belts for camshaft or ancillary systems.

In addition to having power and torque outputs in excess respectively of 840PS and 650Nm, the engine was also chosen for its structural qualities; for the first time in a McLaren production car, the engine is an integral part of the chassis. Conventional practice in race car construction, this design approach optimises weight reduction by negating the need for additional chassis structures or subframes behind the carbon fibre monocoque.

The race-derived seven-speed sequential gearbox, which features a bespoke casting and casing – the latter manufactured from aluminium with magnesium panels – is mounted to the back of the engine with the rear suspension fixed to the gearbox casing. Internally, straight-cut gears engaged via a multi-plate carbon fibre clutch are ideally suited to the aggressive shifts demanded in a track application. The system is fully automated and software controlled, removing the need for the driver to operate the clutch, aiding pit-lane pull-away.

In common with every McLaren since 1981, the Solus GT is based around a carbon-fibre monocoque, in this case one created using specialist low-volume production methods including a carbon ‘pre-preg’ process for higher structural strength and a high uniformity of finish to the material. The front and rear chassis structures are also made from carbon fibre, with the engine and gearbox forming the rest of the chassis.

Carbon fibre is not the only high-value material in the Solus GT. Further embracing technologies used in the top tiers of motorsport, 3D-printed titanium components have been used for the halo cockpit protection structure and roll hoop. This is the first time the approach has been adopted for structural elements in a McLaren production car, allowing a tailored design as well reducing weight.

The suspension system incorporates double wishbones with inboard torsion bar damping, operated via pushrods at the front and pullrods at the rear. Both axles are linked by anti-roll bars, with tuning options available to the driver. Fabricated from steel for enhanced durability, the front suspension links are encased in aerodynamic carbon fibre shrouds similar to the approach in Formula 1.

Housed within the distinctive wheel pods are 18-inch forged aluminium wheels with centre locking nuts, shod with Le Mans Prototype-specification tyres available in both slick and wet compounds. Braking is provided by 6-piston monobloc machined aluminium calipers and carbon brake discs and pads. Bias between the front and rear brakes can be adjusted in the cockpit by the driver.

Traditional performance metrics are not as relevant for a track car, but with a target time of 2.5 seconds for 0-100km/h acceleration and a maximum speed of more than 200mph – in combination with the car’s light weight and strong aerodynamic abilities – the McLaren Solus GT has the performance credentials needed for an extreme track machine.

In incorporating every element that has made McLaren a world-beating automotive force, the Solus GT is also a showcase for the craftmanship available to McLaren customers from McLaren Special Operations (MSO). With a project such as this, the MSO service goes beyond the car itself to a level of luxury customer engagement and accessibility unique to McLaren. A bespoking process ensures every Solus GT is unique and regular updates on the development programme, including access to prototype drive sessions that can influence the driving characteristics of the car ahead of production, are offered.

Solus GT track events are planned, and all cars will be delivered with a flight case to allow owners to support their own track activities. This includes a comprehensive set of tools, vehicle jacks, stands, radio sets and a coolant pre-heater.

The McLaren Solus GT is currently at the track-testing stage of its development process. The first of 25 customer cars – all of which are sold – will be delivered in 2023.